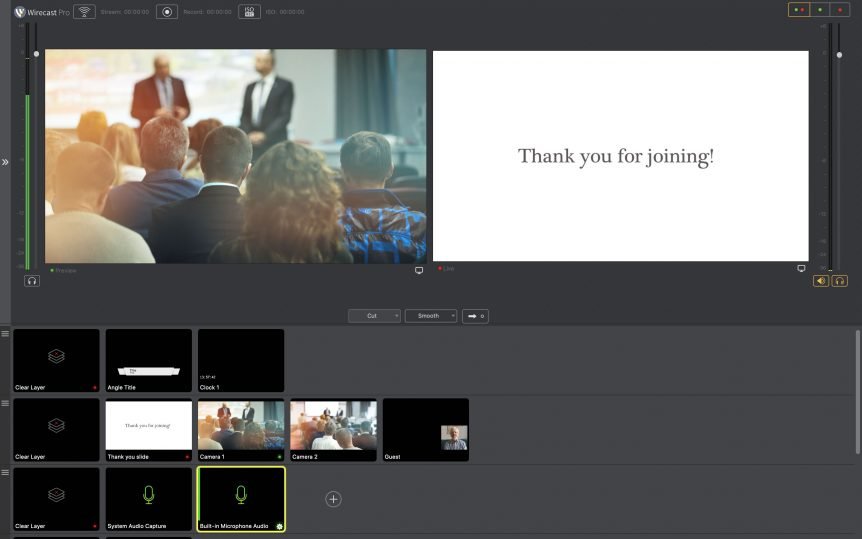 Nevada City, California, – Telestream®, a leading global provider of digital media tools, quality monitoring and workflow solutions for the production and distribution of video, today announced that Kedrion Biopharma Inc. — an international company headquartered in Fort Lee, NJ that collects and fractionates blood plasma to produce and distribute plasma-derived therapeutic products — is relying on Telestream’s Wirecast Gear to deliver a live video streaming experience for its worldwide team of employees. Specifically chosen for its ability to remove the guesswork, uncertainty and complexity from producing live video streams, Wirecast Gear is helping Kedrion bring Town Halls and Lunch & Learns to its 900-plus team. The information that’s being provided keeps the staff apprised of business developments and offers in-depth video training on key aspects of its operations.

McCaleb relies on Wirecast Gear to produce four to five Kedrion Town Halls a year, which feature a 15-minute video pre-show with sometimes up to six guests, for multi-camera shoots. Unlike the Town Halls, Kedrion’s Lunch & Learns are designed to teach and train company personnel on all aspects of a subject or issue.

“With Wirecast Gear, all I have to do is plug my cameras and audio sources into the ports on the back of the device and I’m good to go,” said McCaleb. “This live video streaming solution has proven to be reliable, portable, and affordable. That’s the value proposition for us.”

For McCaleb, the solution’s stability and dependability are key factors since, prior to his acquisition of Wirecast Gear, his video streaming experience had him enmeshed in the set-up and strike of a very kludgy third-party workflow. In addition, space-constraints at Kedrion facilities precluded him having a fixed video studio or production control room, making portability a key concern. To address this, McCaleb created a “fly pack” that includes Wirecast Gear (just 15 pounds) as well as two video cameras, mics and a small external audio mixing board, to take to various shooting locations.

“Since Wirecast Gear is a self-contained, purpose-built streaming unit, I now have fewer components and cables to pack-up, move, and set-up than before,” McCaleb explained. “The software that runs on the box lets me pull together a top-flight, multi-camera presentations, enhanced with titles, animated graphics, and other video elements. I preset the camera angles and moves I want, click on the shot, and it pushes out live. Everything I need is already integrated into a box that’s ready to stream with uncompromised quality. Wirecast Gear has proven to be an ideal streaming solution and an integral part of our global corporate communications toolbox and strategy.”

Now the go-to solution that Kedrion Biopharma relies on to live-stream its internal communications events, McCaleb hopes to soon expand the streaming operations with Wirecast Gear to include external corporate events.