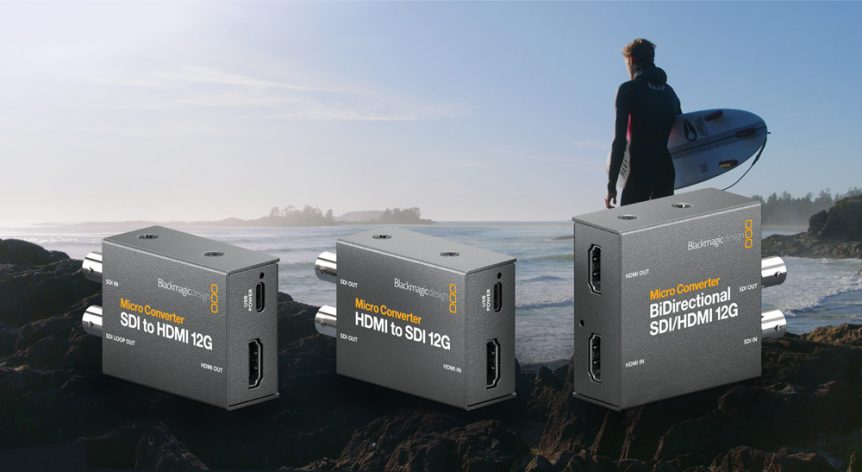 The new Blackmagic Micro Converters are incredibly tiny broadcast video converters that let customers connect between consumer HDMI and professional SDI equipment. The rugged and miniaturized design makes them small enough to be used anywhere. Customers get professional 3G-SDI or 12G-SDI connections, depending on the models, so customers can work with SD, HD and Ultra HD formats up to 2160p60. Micro Converters use USB for power, so they can be powered directly from televisions or laptop computers. Customers can even purchase them without power supplies. Only Blackmagic Micro Converters feature custom electronics that conform to global broadcast specifications, and can be updated to new standards in the future.

The Micro Converter SDI to HDMI 12G model is perfect for monitoring in all SD, HD, 4K and Ultra HD standards up to 2160p60. It includes a 17 point 3D LUT for color calibrating monitors. Customers can also output the 3D LUT on the 12G-SDI loop output. Plus it supports DCI film rates including 4Kp24, 4Kp47.95 and 4Kp48.

The Micro Converter SDI to HDMI 12G model is perfect for connecting HDMI cameras and computers to professional SDI equipment. Customers get two 12G-SDI outputs for connecting to SD, HD or Ultra HD equipment. When working in HD it supports 3G-SDI level A and B. This model also supports film standards including 4Kp24, 4Kp47.95 and 4Kp48. 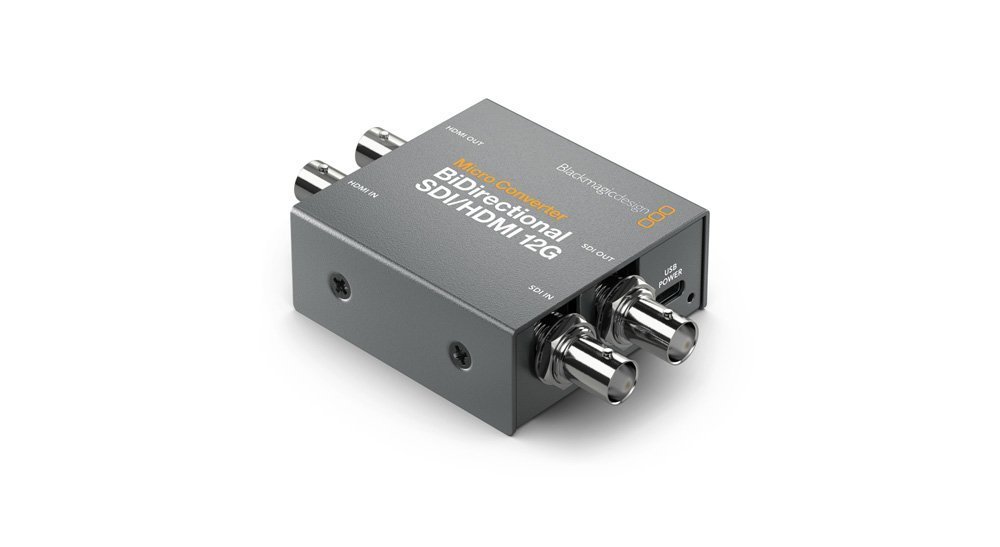 The Micro Converter BiDirectional SDI/HDMI 12G model can convert in both directions, in different standards at the same time. Customers can convert SDI to HDMI and HDMI to SDI simultaneously. Plus it supports camera control protocol conversion, so customers can use Blackmagic Pocket Cinema Cameras with professional SDI live production switchers.

Unlike cheap converters, Blackmagic Micro Converters include the highest quality signal processing and deep bit depth video pipeline. Micro Converters have been engineered with precision electronics so customers get very low SDI jitter, allowing customers to extend SDI cables over long distances. That’s vital for live production where equipment such as cameras can be a long distance from switchers. Blackmagic Micro Converters work with both 8 and 10-bit video formats, in RGB or YUV, and in all SD, HD and Ultra HD formats, depending on the model, up to 2160p60. They even support 1080p24, 1080p47.95, 1080p48, 4Kp24, 4Kp47.95 and 4Kp48 film rates. Plus customers get fully embedded audio and timecode support.

For color accurate monitoring, some models include a 3D LUT. Customers can apply custom looks, color and gamma changes in real time for on set monitoring. Plus LUTs can also be applied to the SDI loop output, allowing customers to use the converter as a 3D LUT processor. 3D LUTs are great for allowing a low cost computer monitor or TV to be used as a color calibrated broadcast or grading monitor. 3D LUTs are included on the SDI to HDMI 3G, SDI to HDMI 12G and BiDirectional SDI/HDMI 12G models. Customers can even use DaVinci Resolve to create custom 3D LUTs. Because DaVinci Resolve can be downloaded free, it costs nothing to start creating their own library of 3D LUTs. Imagine reproducing old film stocks.

Micro Converter 12G models have everything for the latest HDR workflows. Simply connect a HDR monitor, projector or TV and customers are ready for HDR monitoring. Static metadata PQ and Hybrid Log Gamma (HLG) formats in the VPID are handled according to the ST2108-1, ST2084 and the ST425 standards. Micro Converter 12G models handle ST425 which defines 2 new bits in the VPID to indicate transfer characteristic of SDR, HLG or PQ. Plus the ST2108-1 standard defines how to transport HDR static or dynamic metadata over SDI. There is also support for ST2082-10 for 12G SDI as well as ST425 for 3G-SDI sources. Both Rec.2020 and Rec.709 colorspaces are supported. 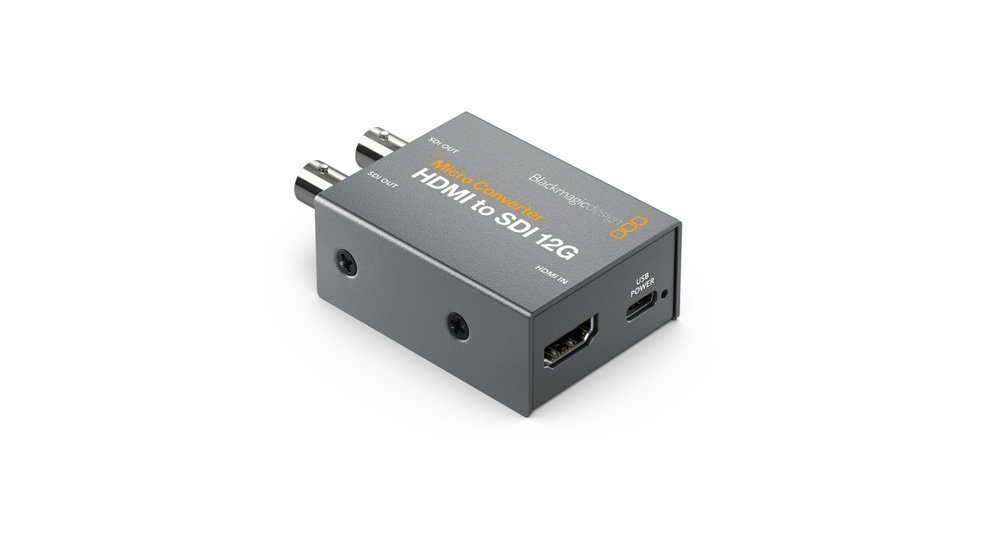 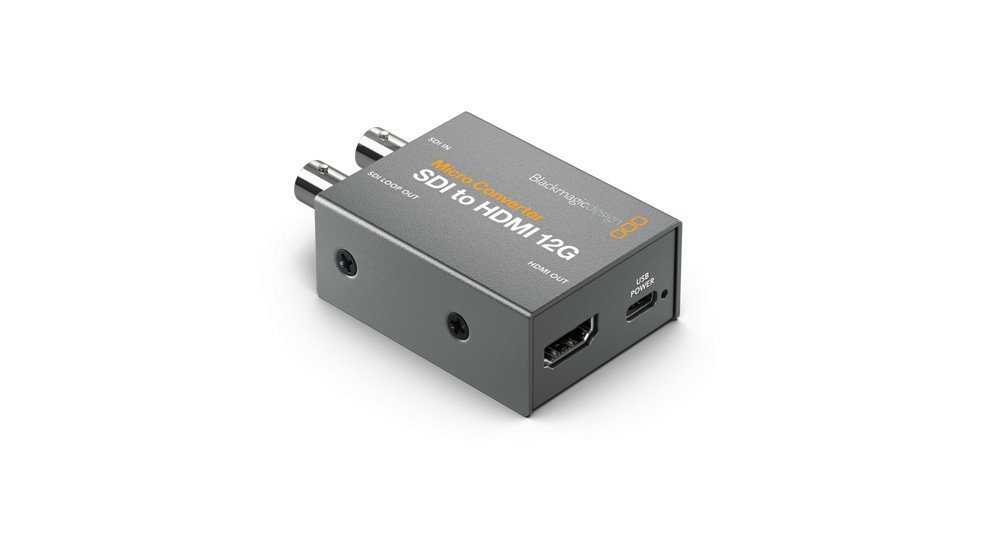