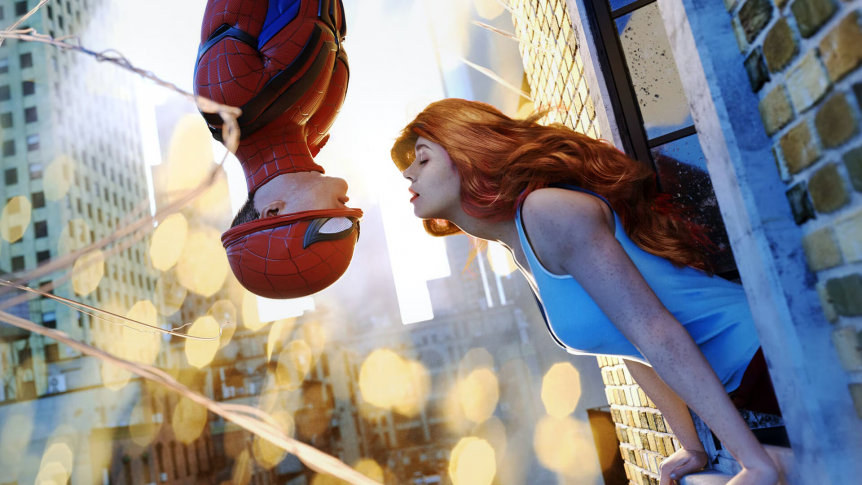 Designer/artist Mike Heath on using 3D to create visuals that keep clients coming back for more.

Artist and designer Mike Heath has been running his own business doing 3D, motion graphics and illustration for more than 14 years. These days he primarily creates book covers for major publishers, including Random House, Penguin, Harper Collins and Macmillan.

Heath loves the work, and has an agent, but he’s also aware that it’s his personal pieces that often attract new clients. “One of the main reasons people hire me is that they are drawn into the heart and story of my artwork,” he says, explaining that his primary tools are Cinema 4D, ZBrush, Marvelous Designer, Photoshop and Octane.

“I think what people are attracted to is the way I capture the innocence of youth within the context of adventure,” he continues. “I have fond memories of the outdoor adventures my brother and I had as kids, and I think the best environments have a touch of manmade culture combined with the wildness of nature.” 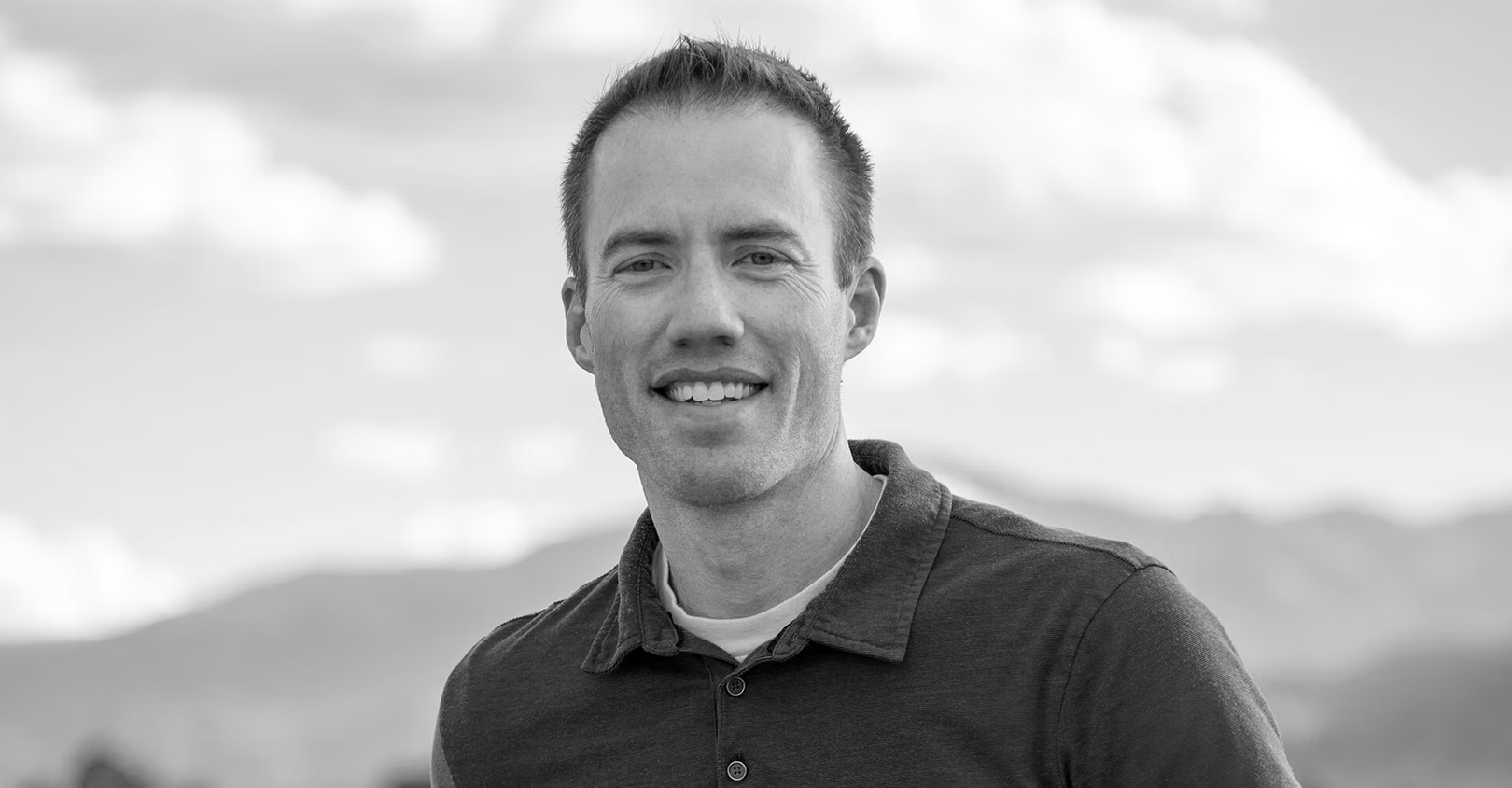 We talked with Heath about some of his favorite personal and commercial projects, and here’s what he had to say.

How did you become a digital artist?

Heath: I’ve been drawing since I was six. Animals were the first things I drew, and I always got good feedback, which was very encouraging. As I got older, I found art very therapeutic, and I especially enjoyed the contrast between art and sports. Sports are loud and intense while art offers a mental escape.

I feel like one informed the other for me and, once I got to high school, I was already thinking I’d like to do something artistic for a living. Everybody said that I shouldn’t do that, though, so I studied business in college for two years. Finally, I just couldn’t do that anymore, so I went and got a graphic design degree and started working at an agency.

After that, I worked for a teen magazine. That was a turning point for me because I learned so much and I hired illustrators for every issue. Sometimes, I would run out of budget and still had pages to fill, so I started doing photo illustration and developing my own style. The magazine gave me the space to do that, and I really appreciated it.

Is that when you started doing illustration?

Heath: No. There was an agency we worked with to hire illustrators for the magazine, and I asked if they’d take a look at my work. They told me that it just wasn’t that good, so I took that as a challenge, which is definitely part of my personality. I try to lean into criticism instead of quitting.

So I created three pieces as photo illustrations and sent them to the agency. They said they would be happy to represent me as an artist but early on I was asked to do stuff that I couldn’t photograph. That meant I had to learn 3D. I started out using E-on but quickly switched to Cinema 4D, which people said was easy to learn. 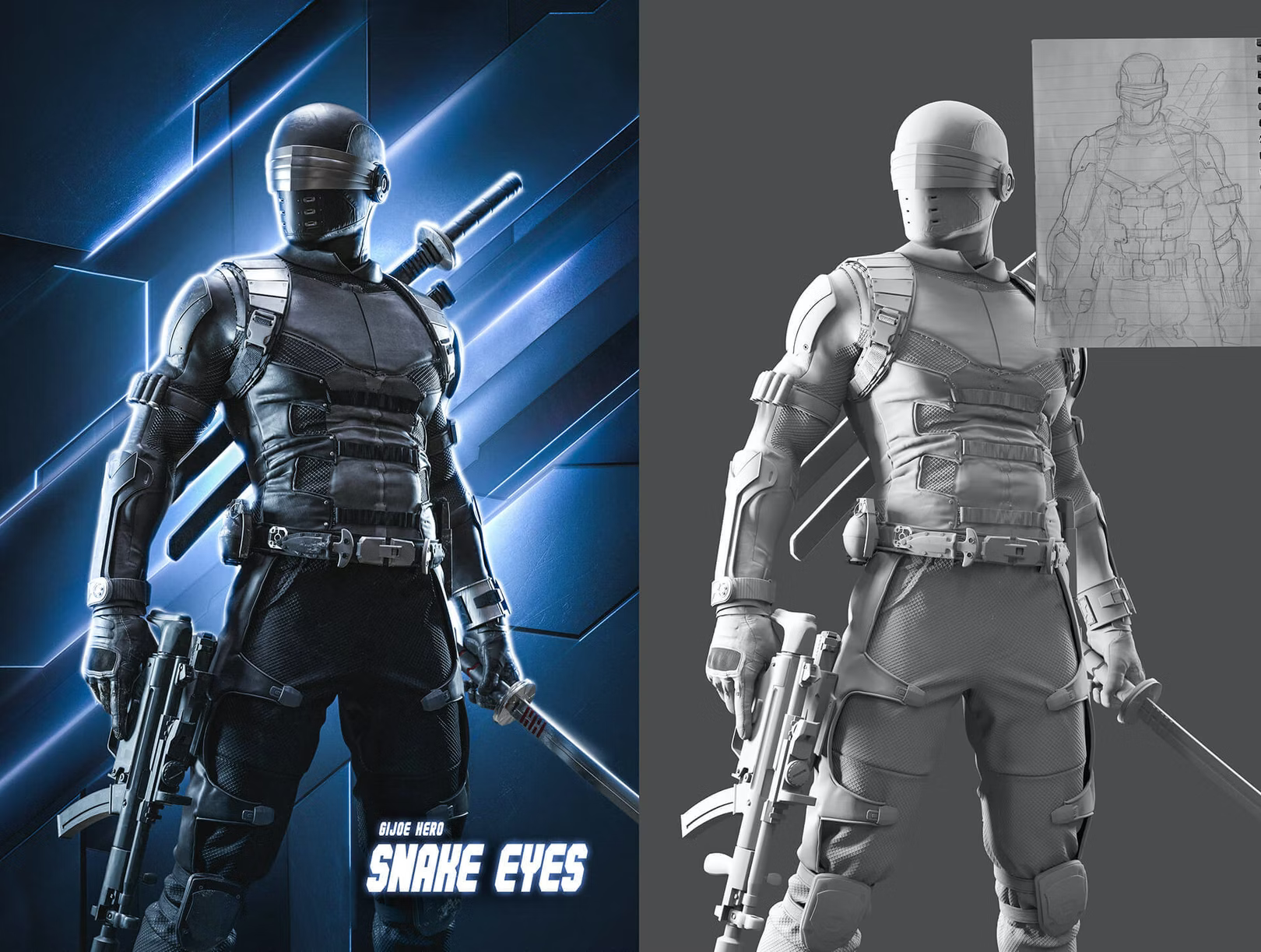 I pushed myself to incorporate 3D into every project and all these years later, I do very little photography and mostly 3D. All of my 3D artwork is very much informed by my drawing, sculpture and photography.

Tell us about some of your personal projects.

Heath: I call Real American Hero my COVID project. Business had died down a lot and I decided to focus on character design. I saw some pictures a guy had posted on ArtStation and they inspired me to choose G.I. Joe as the theme.

It took less than a month to do all 10 of the designs I came up with, and it was a really fun exercise. I’m not a perfectionist. You need to be able to work fast for clients, and you can’t be married to the art. I know how to put passion in up front and then let go and let it be about them from that point on. 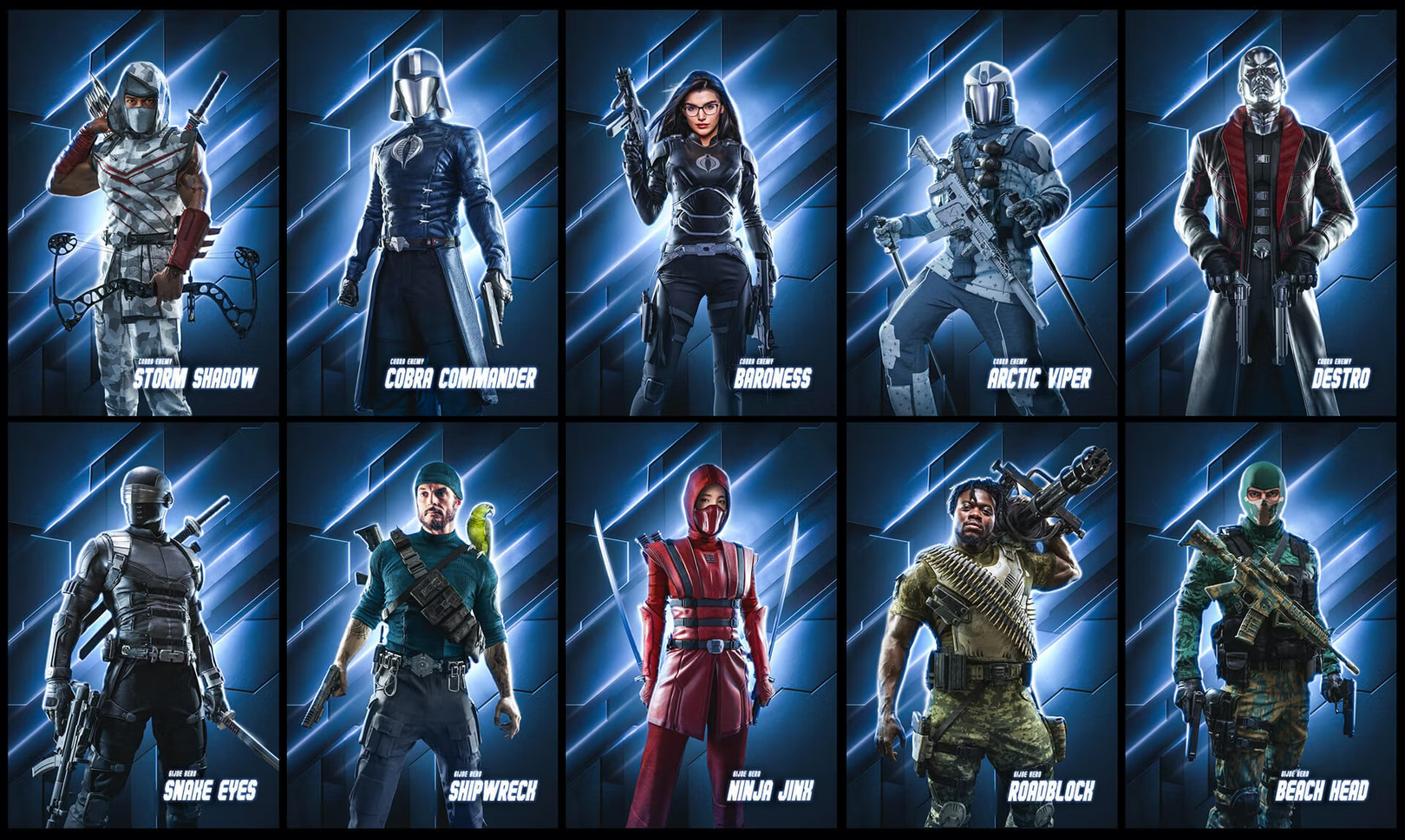 Spider-Man Before You Go is my most popular image on social media. I started out with some basic Daz poses and sculpted on top of them with ZBrush. I used Cinema 4D to create the final scene and rendered in Octane. Spider-Man is a favorite superhero of mine, so this was a fun one. 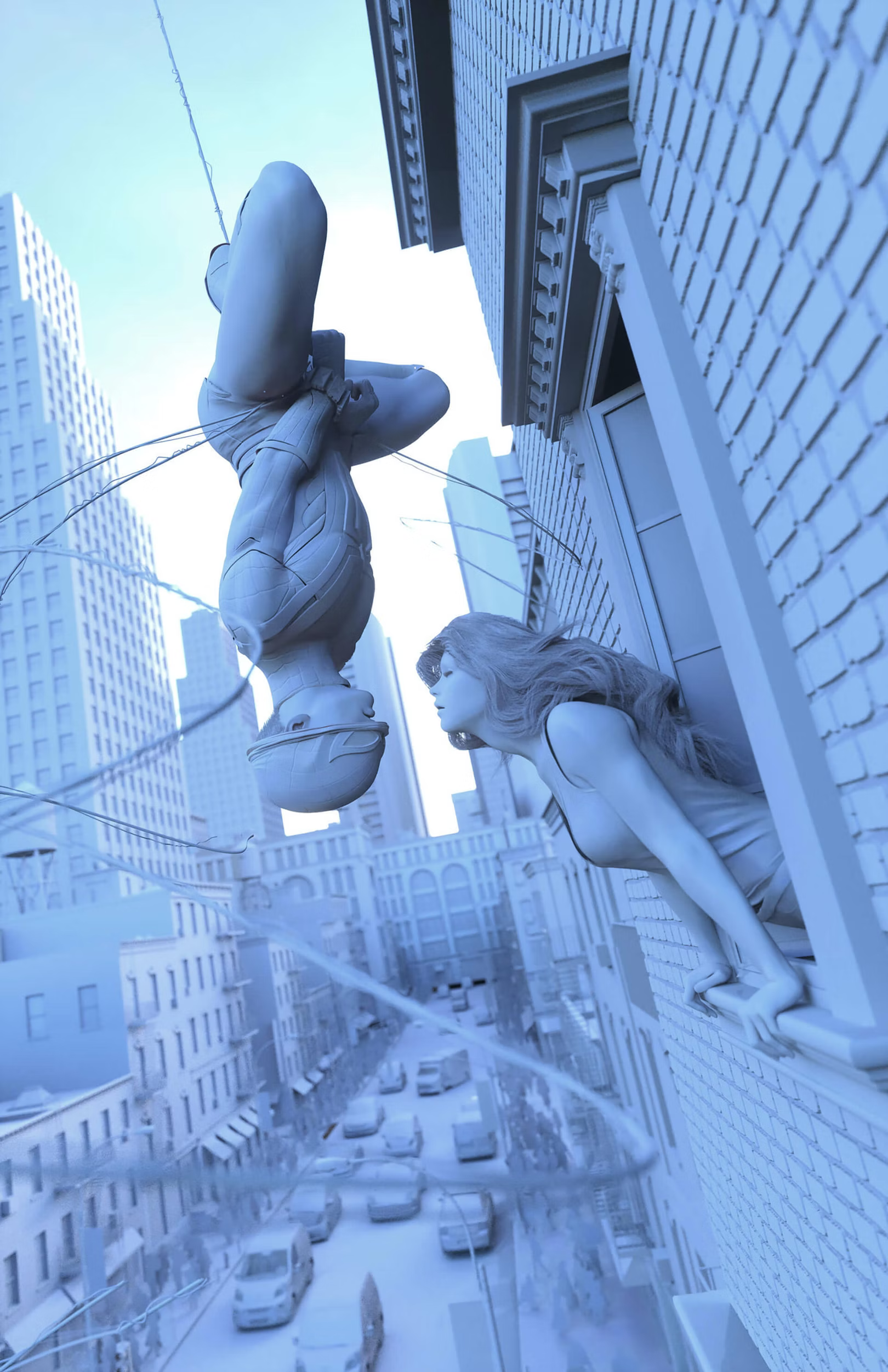 What inspired your Robot 1 and Robot 2 projects?

Heath: My art life is often inspired by spending time outside. I have a family and we go on lots of adventures. I also have a group of guys that I’ve been meeting up with every Thursday for 20 years and those friendships are a huge inspiration because of all the different perspectives we have.

Robot 1 and 2 were inspired by my childhood. I have a lot of fond memories of growing up just outside of San Diego. We lived in a very underdeveloped suburb and my brother and I would explore all day, orange groves and construction sites, and we’d always take our bikes. We would also make inventions and imagine things like, ‘Hey, do you think we could find a giant robot?’ 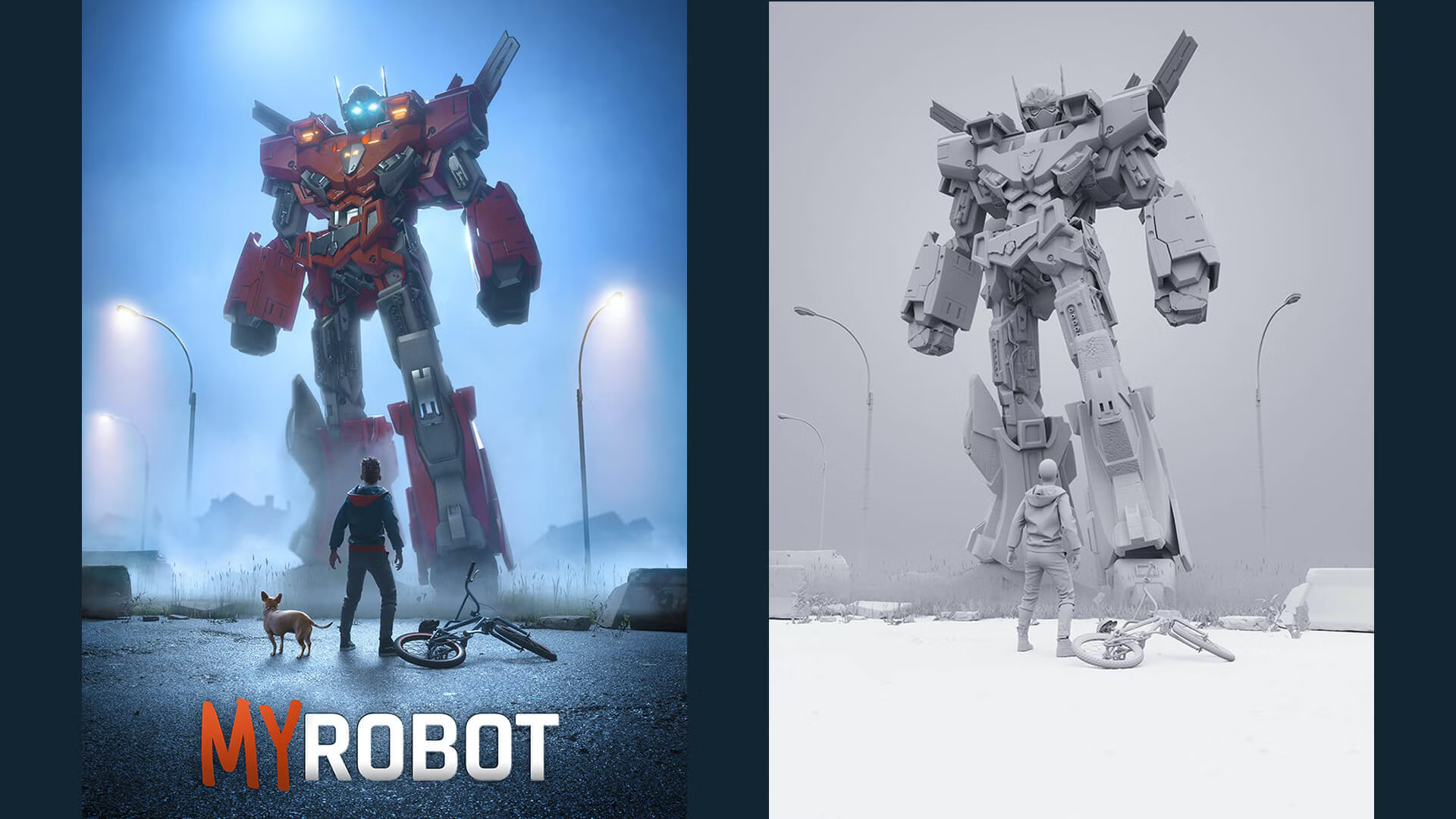 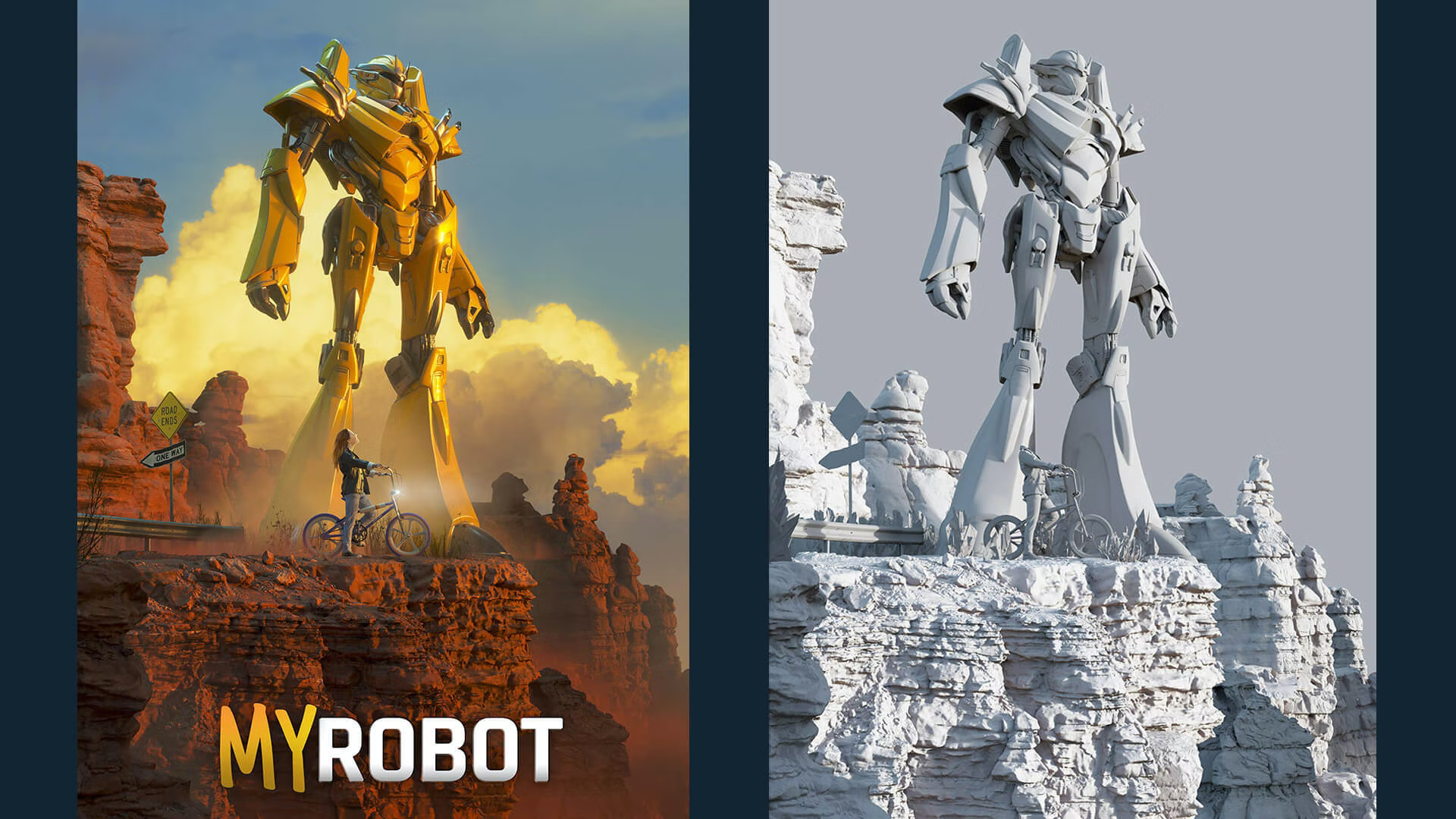 I designed each of the robots in two or three hours using a few pieces that I bought. In typical kitbashing fashion, I used random pieces and pushed and pulled them into meaningful shapes.

C4D is great because it gets out of the way and feels like a playground. Whatever you want to do, you can figure out a way to get there so there’s lots of room for exploration. I like to use ZBrush for design and I used Marvelous Designer for the kids’ clothing.

I like to think about things, like what the relationship might be between the kids and the robots. And I enjoy storytelling and always think of the narrative that goes with the images I create. In the first image, the boy has just discovered the massive alien and is struck with fear and awe. The second one pictures a girl and a robot who are well into their friendship and showing each other new things.

What are some other favorites?

He ended up losing the fight, so they never used it, but I enjoyed making it. The client threw a little more into the budget for animation after I told them what I had in mind. I designed it to feel almost like a training sequence where he does some pre-fight meditation. I hadn’t learned character animation yet, so I sculpted a high-res character of him in ZBrush and built the story around that and I think it worked pretty well.

Another favorite is a book cover I did for “Daring Rescue.” The book is based on a historical event involving the SS Pendleton, and there was a movie too called “The Finest Hours.” I love working on history books.

This project was a good challenge for me because it had very specific items, like the rescue boat. I was working on a short timeline, so I got some parts of the vehicles online and then used ZBrush to finish them. I also went into the studio to photograph people in work suits. 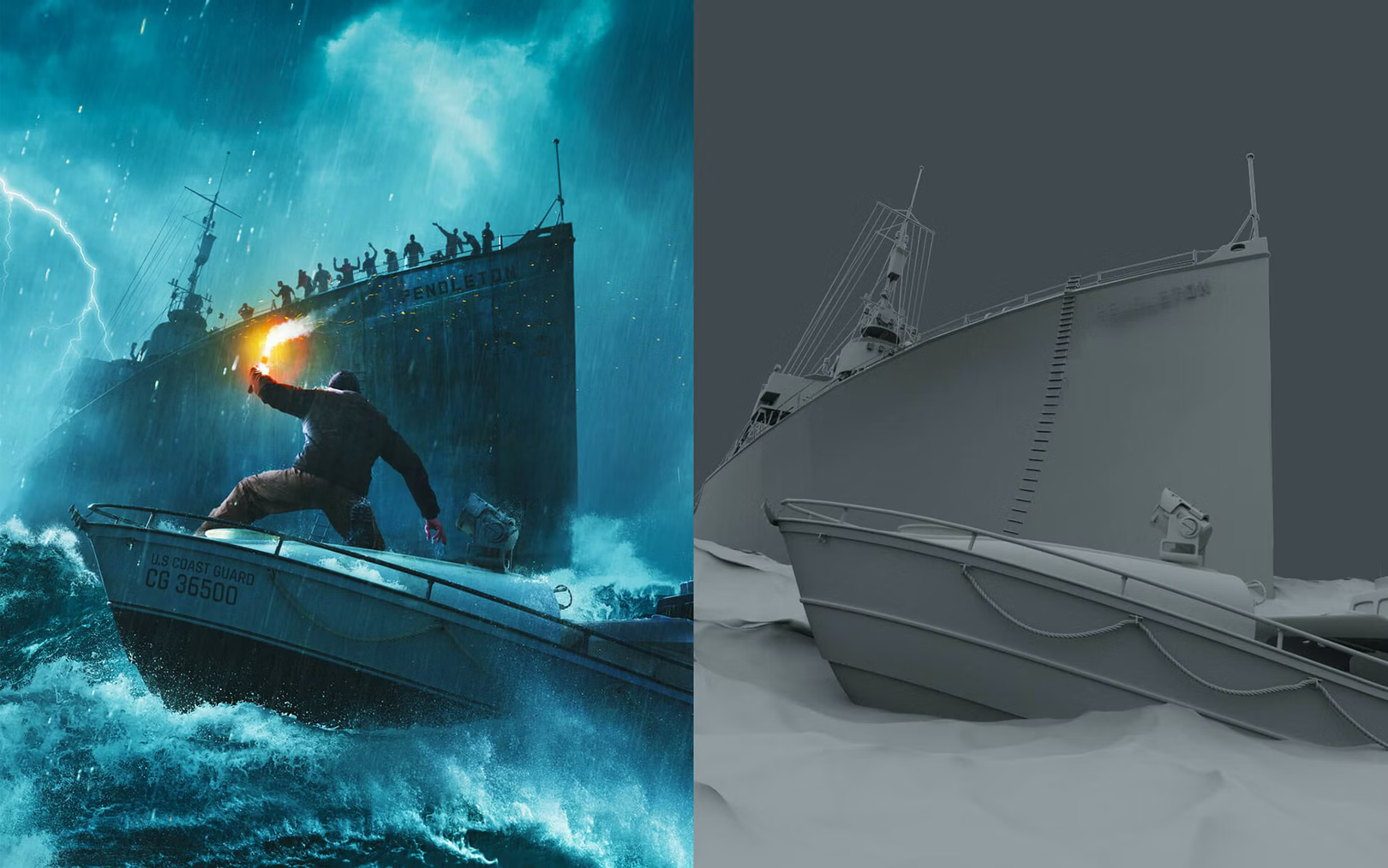 This was epic, historical and specific and 3D can be so helpful for those things because you can create the scenes yourself. Cinema 4D allows me to get a very cinematic look without the time and expense that goes with filming things. Most of my repeat clients want something epic from me. I think that’s what they think I bring to imagery.

What are you working on now?

Heath: I just wrapped up a new sculpture for 3D printing and it’s a massive 26 inches tall. The subject is similar to Windwalker, my previous large-format sculpture showcasing different cultures, the female form and the unique bond between animals and humans. I hope to present it online soon.