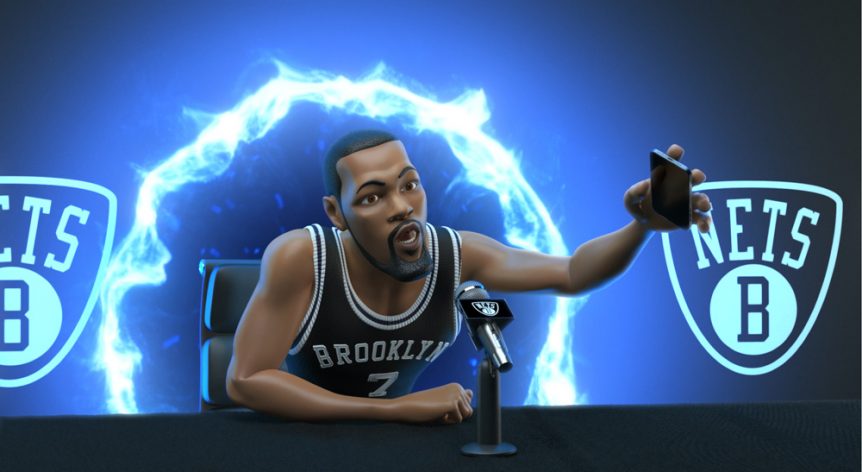 InfiniteWorld is a fully remote company offering brand direct media and asset creation for marketing, eCommerce and the metaverse. It was tasked by sports culture website Bleacher Report and its parent company, Turner Sports/Warner Media, to create a limited animation series that brings the greatest NBA stars of today and legends of the past to life for one on one competition. Current NBA stars featured in the series, which airs on the Bleacher Report website, include Kevin Durant, Joel Embiid, Giannis Antetokounmpo and Kyrie Irving.

A longtime fan of DaVinci Resolve Studio from his work as a stereoscopic supervisor on feature films, Executive Producer Jared Sandrew knew the software would become a key component in production of “The Portal” from the beginning. “I love the tool so much that I insisted that we use it for this project,” said Sandrew.

Bringing Lead Compositor J. Bills to the team, Sandrew immediately asked Bills to learn Fusion Studio as well, realizing other high end compositing packages would be cost prohibitive for the show. With Bills’ extensive experience not only as a compositor but also as an editor and colorist, Sandrew quickly moved him to lead the entire post workflow. 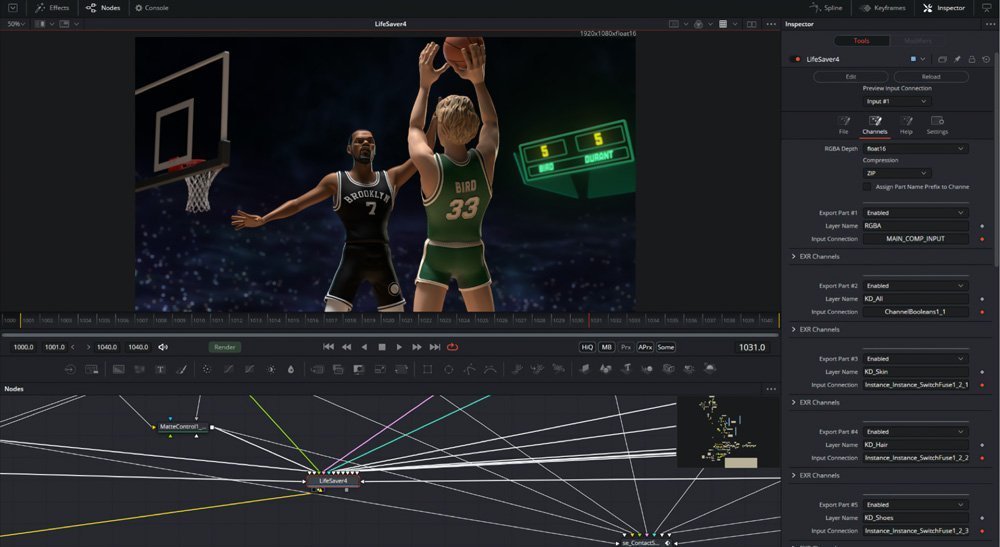 Creating a workflow became the key ingredient in producing the level of quality expected by Bleacher Report within the tight time constraints. “Even though budget is a common excuse, I don’t feel that it was a huge influence on the tools we chose,” said Bills. “Everything needs to be battle tested and solid as a rock with our setup, first and foremost. Crashing and downtime is not an option. Beyond that, it all has to have the capacity to create the level of art we’re capable of, while allowing us to build a pipeline that saves as many clicks as we can along the way. The short of it, Fusion and Resolve tick all the boxes.”

At the start of each episode, Director Will Groebe provided basic storyboards, and a scratch track was created. Bills brought the elements into DaVinci Resolve Studio and quickly built an edit timeline for review. “To really give a feel for what the final might look like, a lot of times this ‘boardomatic’ edit can get quite involved and complicated,” added Bills. “I remember scenes in the early drafts of the pilot episode where we were doing full blown comic book style split screen panels and motion graphic mockups, Saul Bass style.”

“One of the things I love the most about Resolve is that the combination of tools has opened up new ways to work,” continued Bills. “It’s great to be able to build the soundtrack up in either the edit page, or to be able to toggle over to Fairlight for more heavy duty audio work instantly. Regardless of which mode I’m in with a particular scene, I can work quickly and do things like open up the Fusion tab to do a little paint fix on a storyboard, maybe flop a character to face another direction, or cut and paste the ball into the other character’s hands to make a board work without having to go back to Will for a fresh drawing. This is where that ‘one app to rule them all’ model really proves its worth. We move really fast, and if I have to stop to open up another app just to search out an audio track and mix it in, or do a minor compositing tweak, it would seem like such a buzzkill after working with Resolve.”

Once the storyboard is approved, the 3D team begins their work, generating full 3D elements and character animation. Temp animations are provided back to Sandrew and Bills, and additional reviews in DaVinci Resolve Studio help them catch issues that may not have been visible in a 2D format. As the edit begins to solidify, and Bills awaits more complete 3D elements, he takes advantage of DaVinci Resolve Studio’s multiple tools to keep the process moving. “As we tighten everything up, I am also using some of the downtime while the previz artist is working to catch up on some of the editing backlog, like bringing more layers of sound effects and music roughed in alongside, and further developing the audio track,” said Bills. “Sometimes I’ll add some effects in editing or a quick compositing gag as a stand in.” 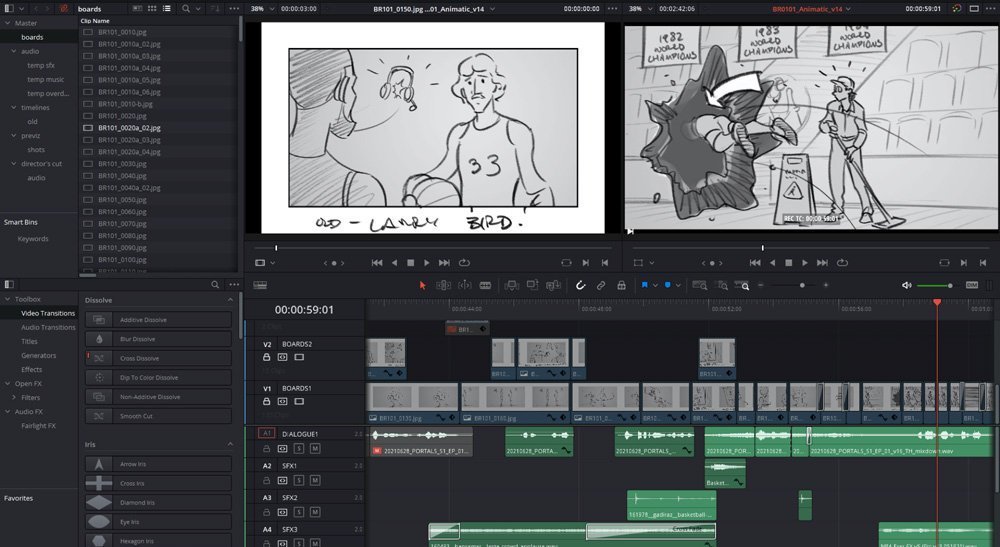 While the majority of the animation is generated in a traditional 3D package, Bills quickly found the powerful 3D workspace built into Fusion Studio could help speed up the process while removing extra work for the 3D team. “We put Fusion’s excellent 3D space to use, for example, in the Jumbotron element that appears in a lot of shots,” said Bills. “We knew it couldn’t be done in 2D or 2.5D since the 3D camera work was so dynamic. Instead, we created it in Fusion. I was pleased that the software was up for the challenge and that we were able to take this element completely off our CG department’s plate as a result.”

For Bills, integration with 3D was critical, and Fusion Studio’s ability to utilize elements to create unique effects became an important part of the workflow, as did Fusion Studio’s ability to handle massive datasets. “The arena environment consisted of nearly 4,000 spheres to create a crowd density that would hold up in 3D and look good from all angles,” said Bills. “The orbs were animated procedurally in a 3D package and then brought across to Fusion as raw geo with looped animations via an alembic. Many of our base Fusion comps for these setups kicked up into the 300 to 400 megabyte range, prior to being pre comped out. The crowd solution was definitely a testament to how much data Fusion can crunch in the heat of battle and how robust the 3D system is.”

With four episodes of “The Portal” series under his belt, and more to come, Bills feels like the DaVinci Resolve Studio and Fusion Studio workflow is the best choice for the project. “On the whole, I can’t say enough good things about Resolve and Fusion,” said Bills. “For me, it all comes down to what software excites me the most, lets me produce at a high level, gives me the speed and stability to hit deadlines and clock out at a reasonable hour, and has the features to match up with the tasks at hand. Our mantra on the project is ‘make it work and make it cool,’ and that is what we are able to do with this workflow.”

In the end, Sandrew felt the choice to rely on DaVinci Resolve Studio and Fusion Studio at InfiniteWorld was the right one, for many reasons. “This is most definitely the killer combo for animation studios today, not only in terms of feature set and stability, but especially when you factor in the cost of licensing,” added Sandrew. “Resolve and Fusion punch well above their weight, and they continue to impress me on a daily basis with how well they hold up to the high octane stress we put them through.” 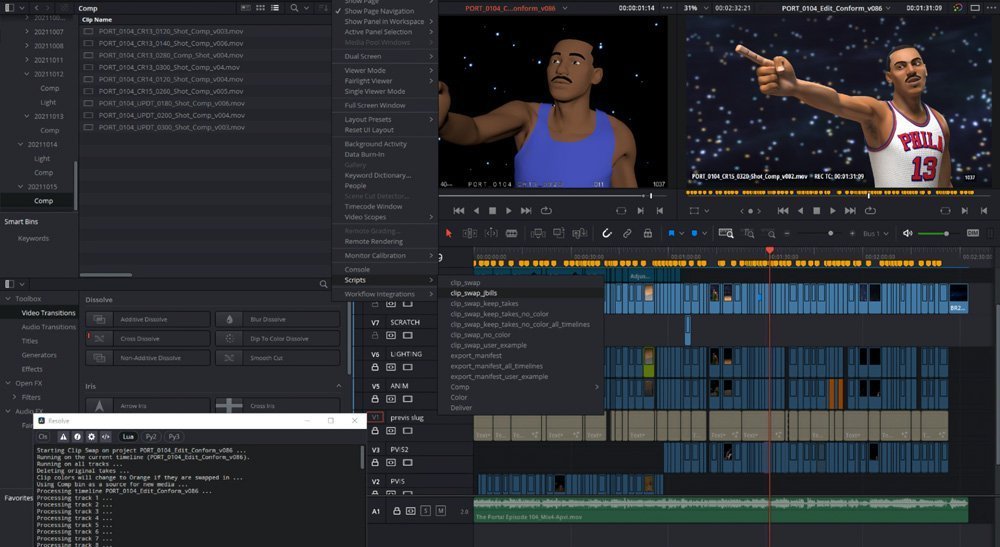