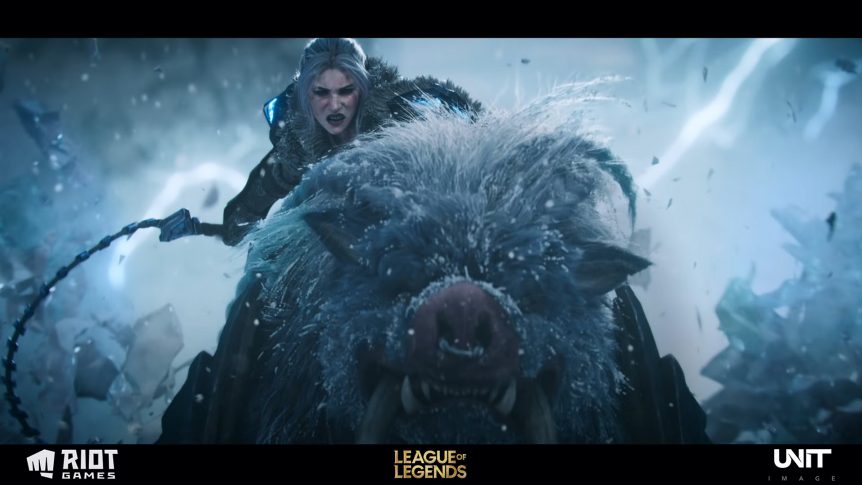 3D Artist Aly Farroukh walks us through his character work for a Riot Games cinematic that has been viewed by millions.

Riot Games introduced the 2022 “League of Legends” season with a spectacular cinematic “The Call.” Directed by Ben Hibon and created in collaboration Unit Image, a Paris, France-based 3D animation studio, the four-minute film offers a realistic take on the game’s famous cast of characters.

To learn more about the project we spoke with Unit Image Character/Creature Artist Aly Farroukh about his work using ZBrush for the characters Ornn and Bristle.

Tell us a bit about yourself.

Farroukh: As a character and creature artist at Unit Image, I'm in charge of modeling, texturing and shading for the characters I’m assigned. I started learning 3D about six or seven years ago when I was studying animation in Beirut, and I realized I had a passion for it. Once I discovered sculpting, I haven’t been able to stop since.

I moved to Paris to continue studying, taking courses and learning about animals. I was interested in creature evolution and how they adapt to different environments. Around that time, there The Rookies had a competition. It’s an industry platform for animation, video games and VFX. There was a scholarship prize for New3dge in Paris, and I ended up winning and that changed my life.

The teachers all work in the industry for many different big companies. I started meeting people and eventually found my future supervisors at Unit Image. My ultimate goal was to try and work there, so I studied their stylized realism and started showing my 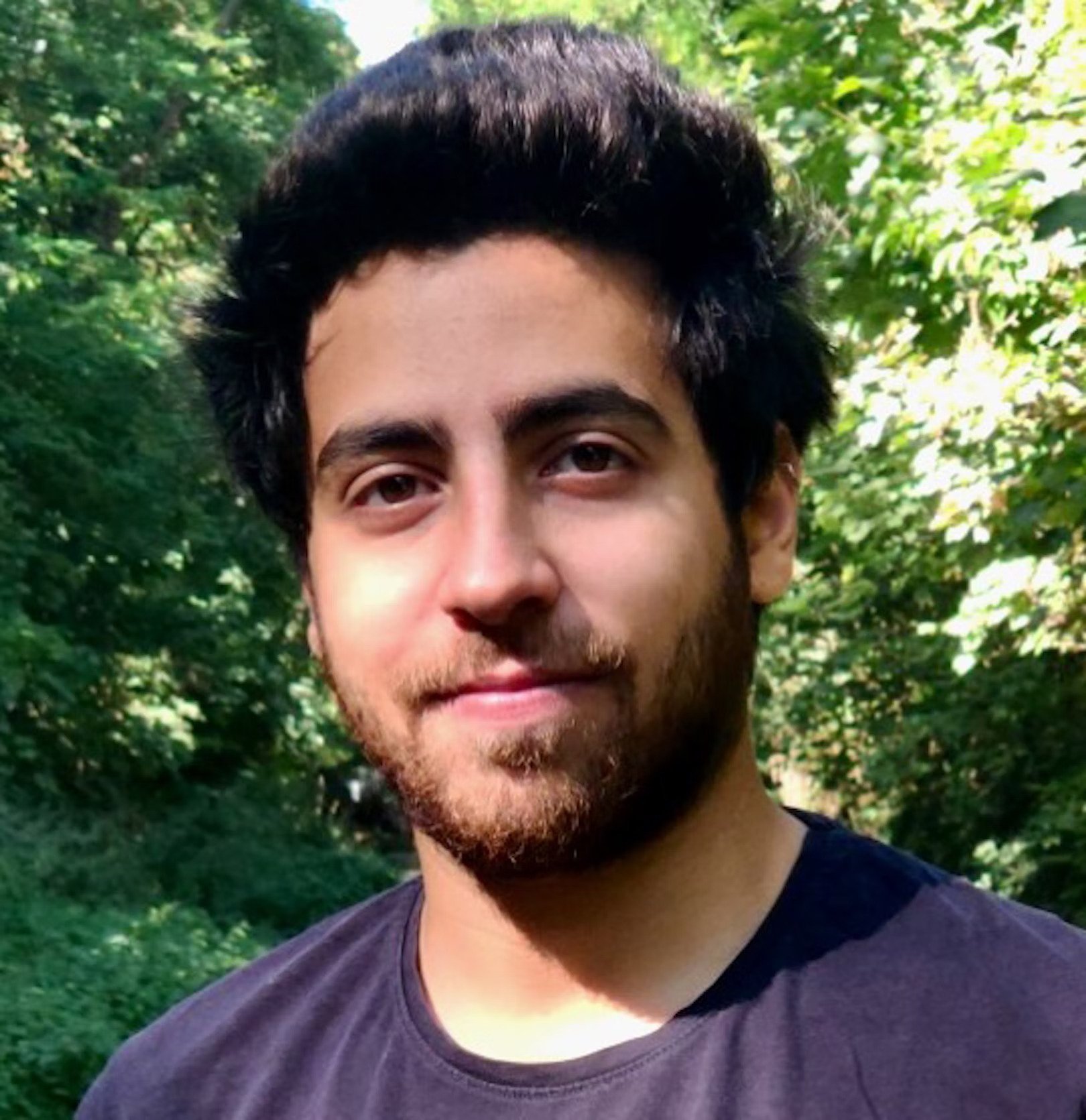 I finished my master’s degree and two years later, here I am working on amazing assets and experiencing amazing opportunities. This team is amazing, and you never stop learning. I love it.

What was it like working on this “League of Legends” project?

Farroukh: If you look back at past “League of Legends” season announcements, they are all done by different studios in various styles. Riot Games and Ben Hibbon wanted Unit Image to bring some realism to their famous characters. Based on their concept art, my supervisors and I worked through what a realistic version of characters and features would look like.

Iteration is always a back-and-forth process, so you never feel like you are working in a vacuum. We have an amazing team, and this project was supervised by Jeremie Moncomble, Florent Duport and Laura Guerreiro for the groom and snow parts. The team is always assisted by two leads, Timothée Hek and Roland Caron on technical and artistic aspects. 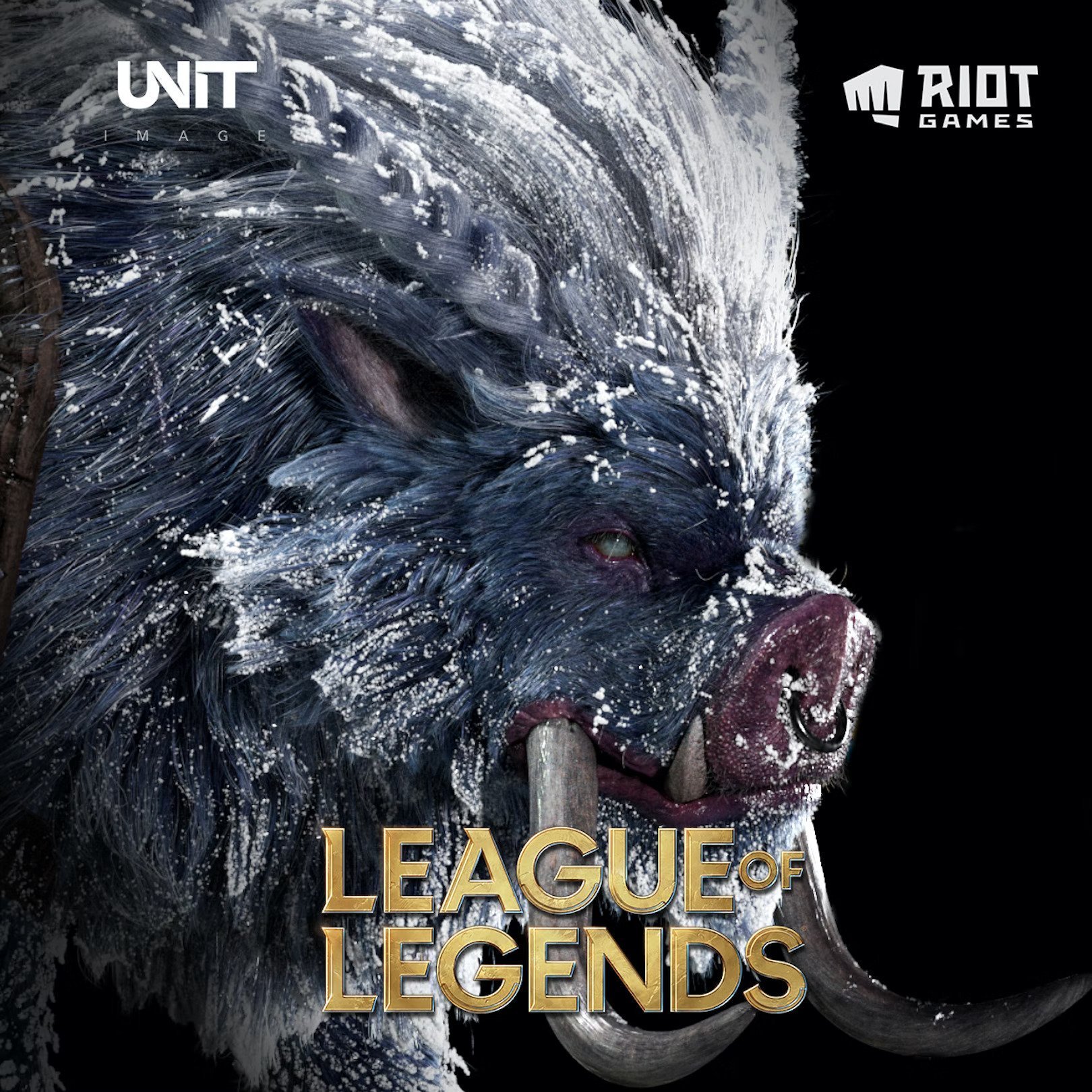 For the Bristle character, we knew we needed a snowy environment with snow sealed inside the fur. We had to base everything on the characters that already exist and really try to capture their personalities.

Once we had the idea set, I started sculpting and studying Bristle’s anatomy. I had to mix a few animals together to get the character right, like a bison, buffalo, cow and a cat. I also knew from the beginning that I needed to create an extreme closeup that started on Bristle’s nose. That was a very big challenge, and I think I ended up doing it over six times. 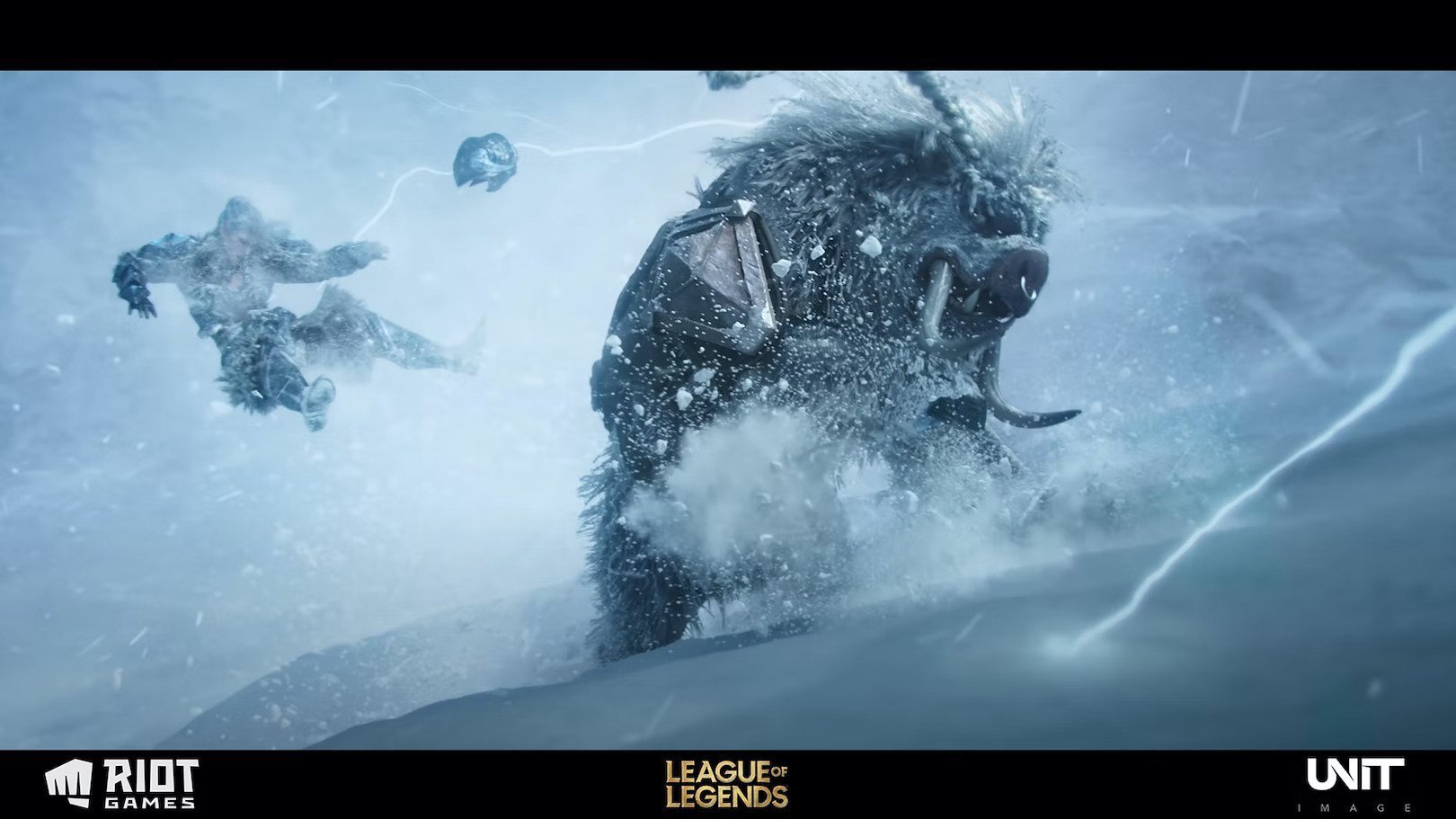 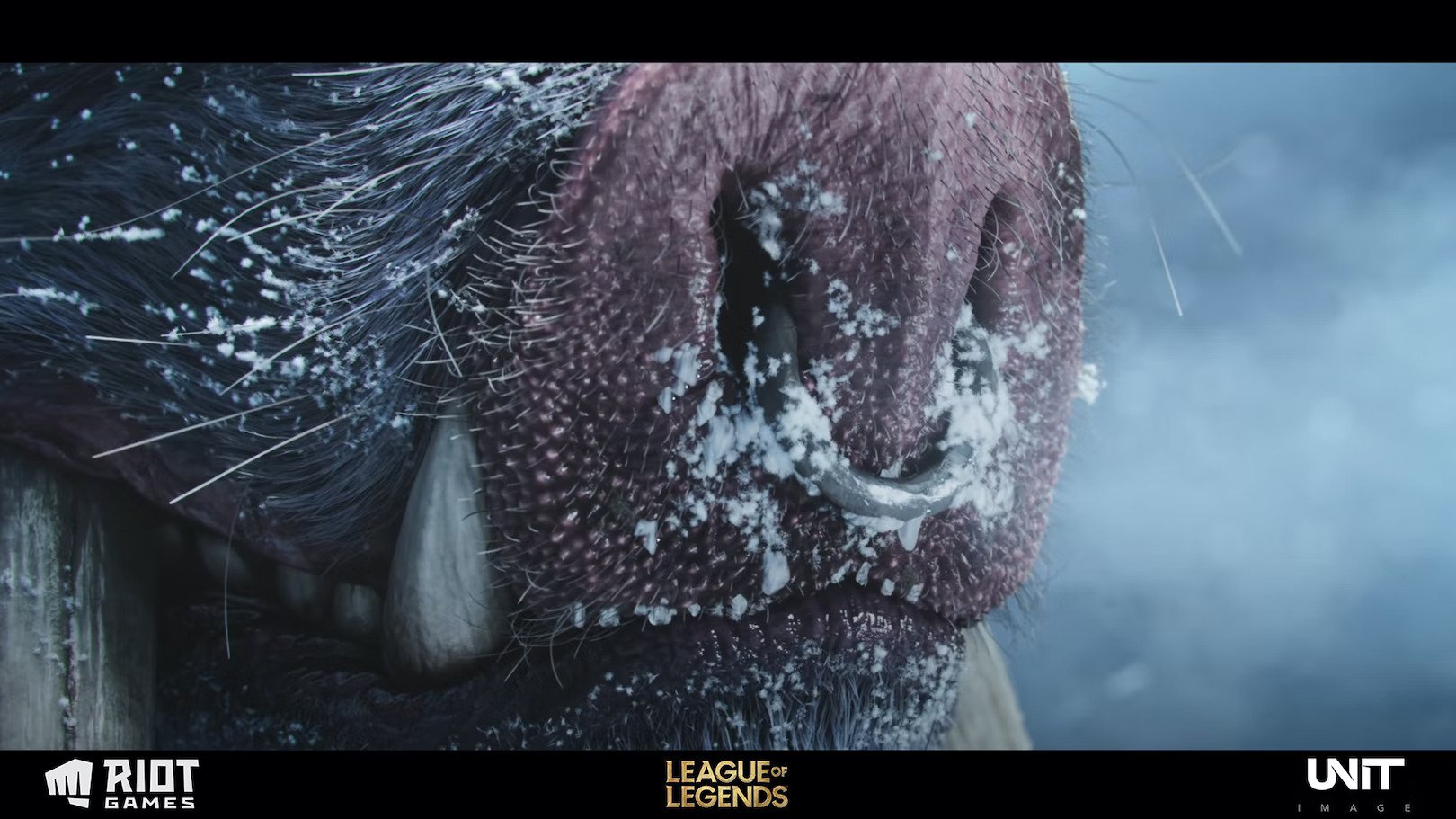 The groom was done by Laura Guerreiro and Laura Salomoni handled the saddles and armor. Blend shapes were by done by Valentin Viennot, and post-animation sculpting by Lucas Margolliet, supervised by Fanny Cabezas.

I really enjoyed scattering snow on the fur and, between me and the groomers, we were able to sculpt the nose and the details of every bump and hair, which was very impressive and fun.

Most of my work on Ornn was improving the face. You don’t really see it clearly because it’s so dark. But his glowing lava arm was really cool to do. Working with that scale was interesting because he’s huge, like a god that is two mountains tall. There’s this light from the volcanic rock that comes through his arm, and it was very satisfying to work on because we knew fans would really look at the details. Remy Lao handled the groom and the clothes were done by Roland Caron. 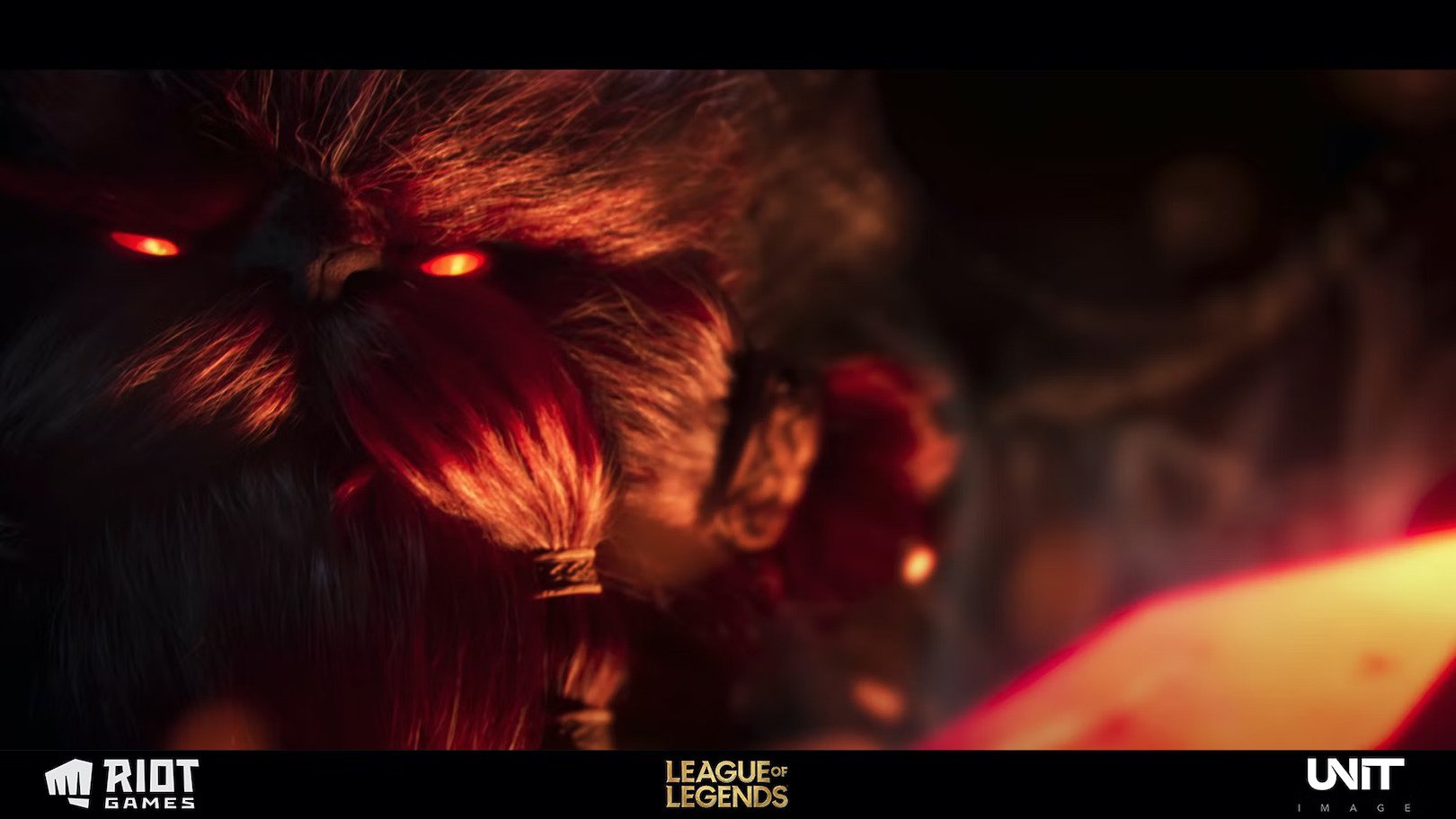 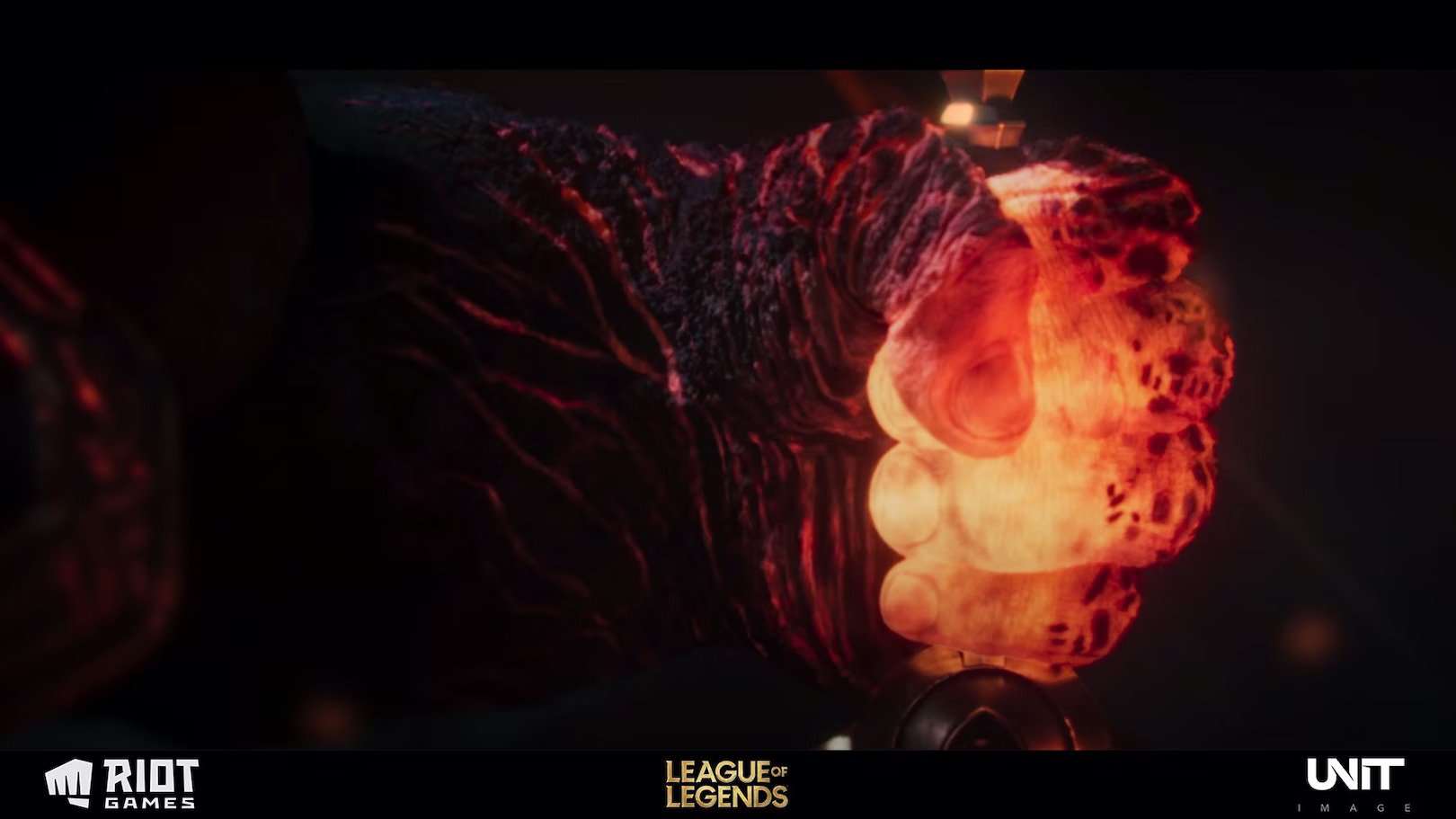 Farroukh: Since I had the 2D concept art to start with, I jumped straight into ZBrush because I like to sketch with 3D forms. I start with a sphere and then get as close as possible to the concept I have. Once the primary forms are validated, I move to a clean topology for animation. Then, the layout team starts working on the animatic.

Next, I move on to the details. Even though we knew the skin wouldn’t be visible in the final render, it’s easier to read if we know the way the skin folds. That helps the groomers too when they come in after me to start adding fur. So I gave them the most information possible, making it clear for everyone.

Everything is connected, the forms, the folds and the impacts of gravity. I drew the muscles on Bristle so they could be seen properly, even behind the skin. I also added a mockup of the gear that he would wear, so you’d have an idea of how it all works together. That eventually became armor, but we were able to get an idea of how the character and gear would work together. 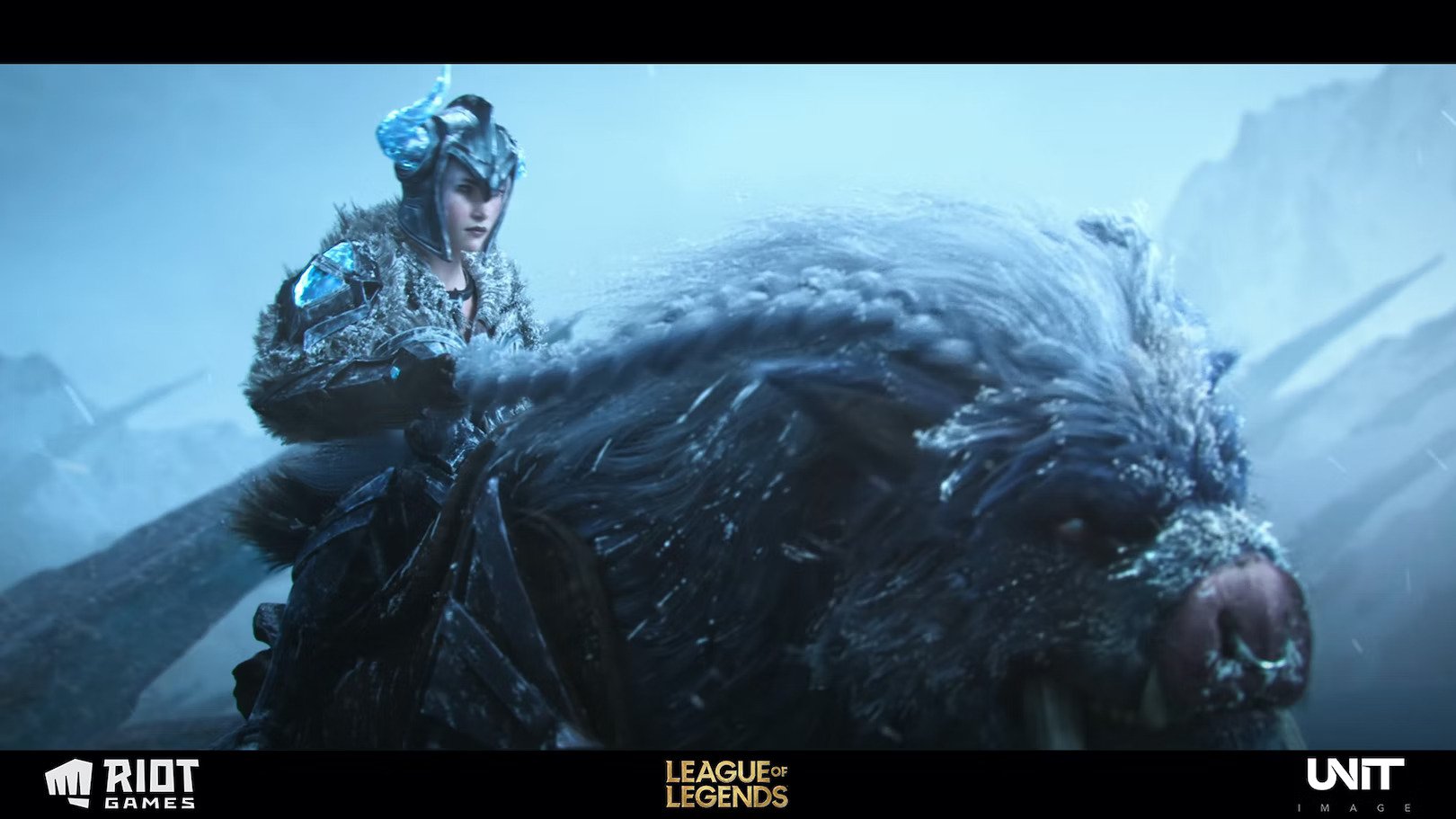 What’s cool about working with a team like this is the liberty to express and interpret the way you see things. The brief and style are so clear, you know your limits and what not to do, and that helps generate harmony between us.

Everyone works so well together, and each week we all have to show a turntable of our progress to make sure everything is still in the same style throughout the whole project. We’re in such good hands, and you never feel like you're a small part of the project because, no matter what you are working on, you’re all working together.

The characters wouldn’t look this good if it weren’t for the lighting and environment departments. I really want to thank the whole team for helping me grow artistically and as a person.

How do you feel about the cinematic getting over 100 million views so quickly?

Farroukh: We were just over the moon. We hit 100 million views in two days, and we couldn’t even imagine that. Now there are over 130 million and counting. It’s so cool that something you put so much hard work into gets seen by so many people. We’ve even received messages from fans saying they’re going to start playing with old characters again because they were featured in the video. It’s all been amazing.