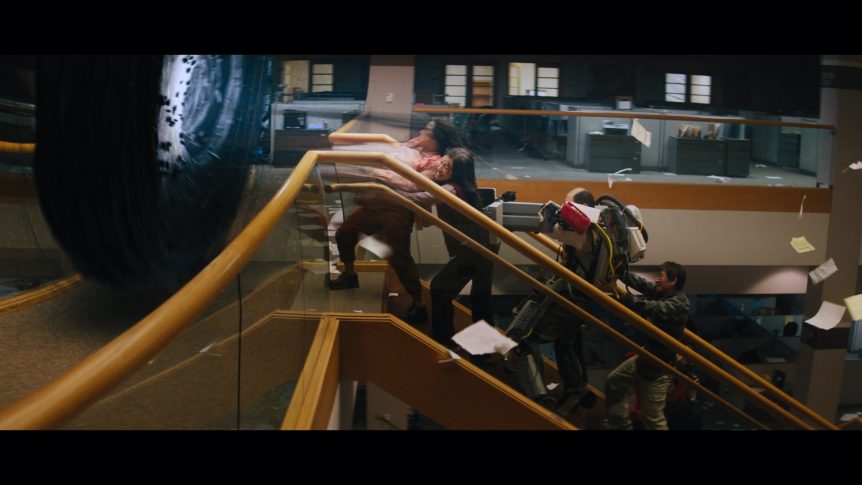 How six artists worked from home to create hundreds of impressive visual effects for a crazy sci-fi adventure.

Evelyn Wang (Michelle Yeoh) is arguing with her daughter (Stephanie Hsu) and unhappily running a Los Angeles laundromat with her husband (Ke Huy Quan) when she hears the inconceivable news that she may be the only person who has the power to save the multiverse from evil forces.

It’s a mind-bending plot made more fantastical when you learn that most of the visual effects in nearly 500 shots were created by a small team of six talented artists led by Zak Stoltz. While some doubted they could pull it off, Directors Daniel Kwan and Daniel Scheinert (aka the Daniels) chose the team because they wanted to work with a close-knit group of friends who could have fun and iterate together. 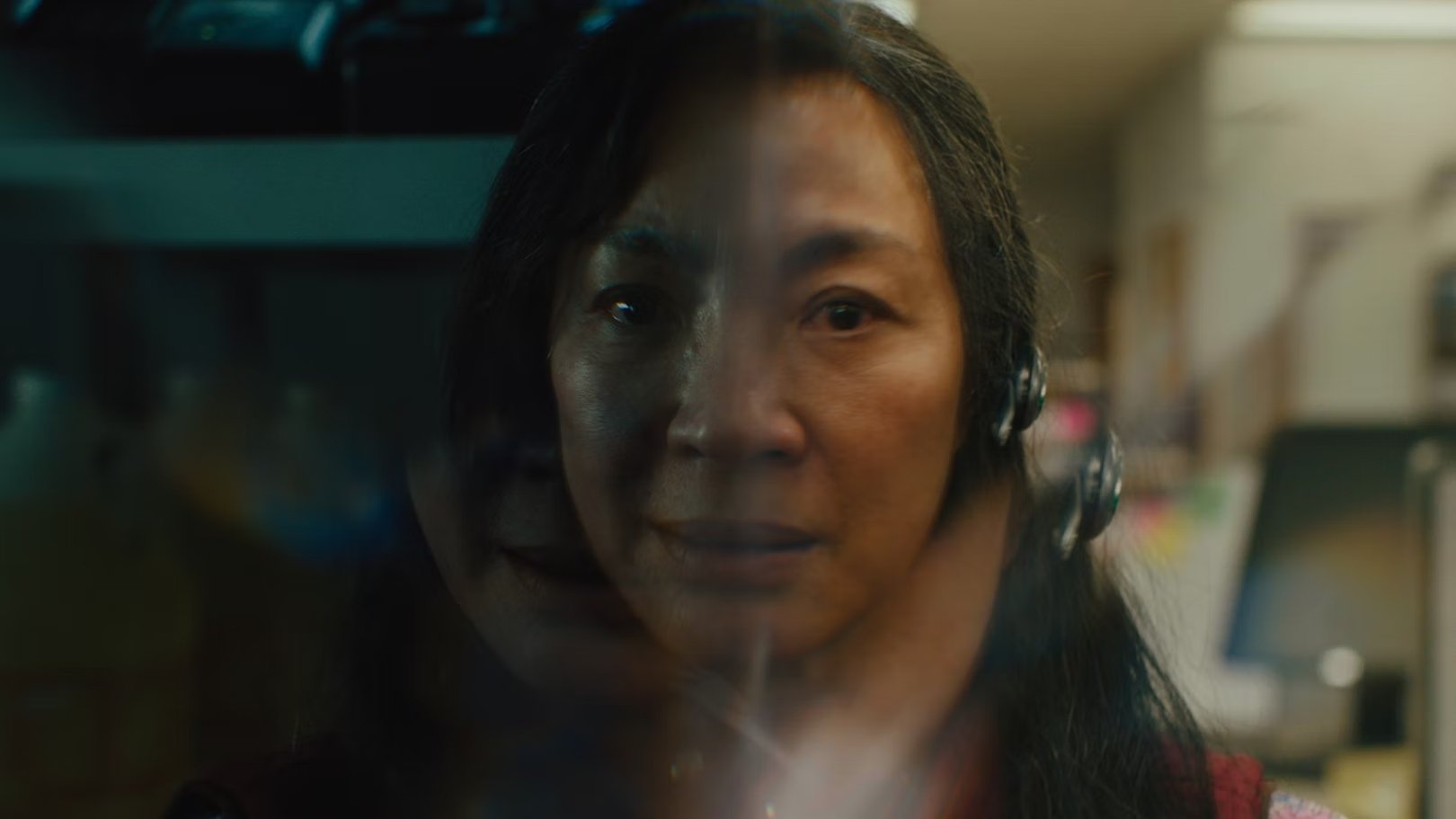 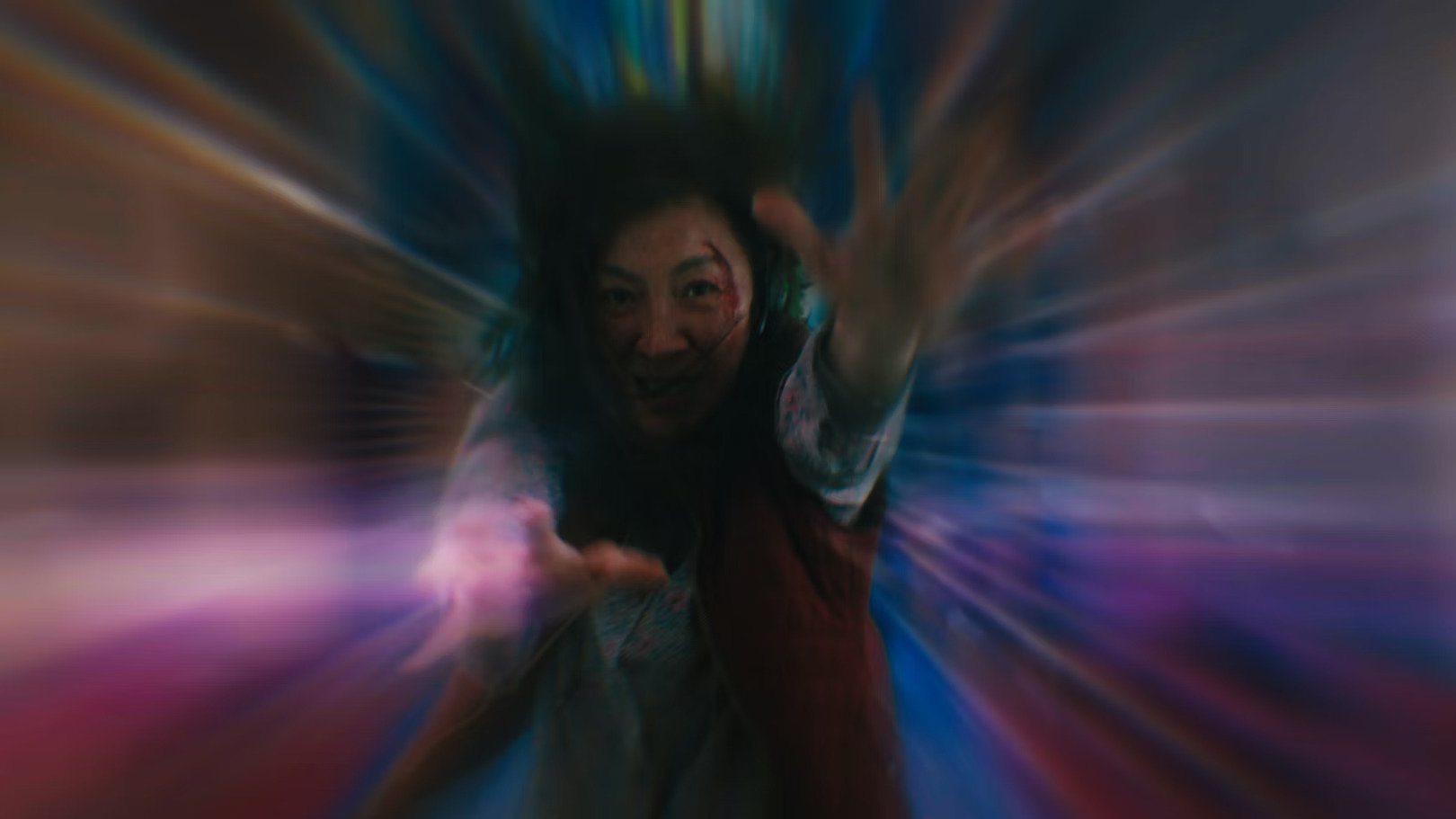 Though Stoltz had never been a VFX supervisor on a feature film, the Daniels had worked with him and some of the others — Ethan Feldbau, Benjamin Brewer and Jeff Desom — on music videos and other projects over the years.

Matthew Wauhkonen and Evan Halleck were new to the team but, as a group, all six artists had experience working as directors, filmmakers, VFX artists and/or art directors.

We talked with Feldbau and Desom about how the team spent a year and a half using Cinema 4D, Blender, After Effects, Red Giant tools, puppets and more to create VFX were “less Marvel, more ‘Ghostbusters.’”

Ethan, tell us about your connection to the Daniels.

Feldbau: The Daniels and I went to Emerson College together, though we were a few years apart. And Dan Scheinert and I had our films selected for the school's LA film festival. Not long after graduating and moving to LA, we reconnected and served as art director on some of their earlier work.

Over the years we started doing film production and building some momentum working on each other’s projects. For “Everything Everywhere,” the Daniels really wanted to staff-up with friends they had previously worked with. But there was definitely a learning curve taking on such a large project.

Jeff, what about you?

Desom: Dan Kwan always tells the story of how, when the Daniels opened their Vimeo account, it started with a music video that I directed. Years later I got a Vimeo award and they got one too, so we met at the ceremony and I went to LA the following week. Awhile later they needed someone to help with VFX on a project and I was basically locked in an apartment with them for a week sleeping under the desk while projects were rendering. That’s really how I got to know them.

Feldbau: Our familiarity with each other was what really made it possible for our team to churn out so many VFX. We were all able to just pitch in and understand how weird things were going to get. It’s funny that this was Zak’s first feature film because I think that made him fearless; you don’t know what you don’t know, so we just did it.

You call yourselves Pretend VFX. Tell us about that.

Feldbau: Pretend VFX is me, Ben, Zak and Jeff and we’re an artist collective. We use the name as a singular net for people who want to reach out to us and communicate with everybody about potential project. If you have something creative on your plate, send it our way and we’ll take a look!

Were some of you on set during filming?

Feldbau: Zak was mostly on set as VFX supervisor and I was there for a few days, largely dealing with motion graphics playback and some of the bullet effects during the IRS staircase climax. In production, I was mostly tasked with look development and design ideas alongside the movie being filmed.

Amazingly, many branches of post happened simultaneously, such as designing/testing while shooting. We were also auditioning VFX shots in the cut as the film was being edited, which gave us that impossibly tight edit people have noticed.

What did the Daniels mean by “Less Marvel More “Ghostbusters?”

Feldbau: They wanted a look to their movie that would be perceived as more physical, more practical, and more photographic/in-camera than most contemporary VFX heavy films. It's tricky to explain, because EEAO is technically a very digital film, with lots of CGI, but it is aesthetically crafted, well-synthesized visual trickery that looks photoreal. We presented CGI to the Daniels in C4D and Blender and were able to fool them into feeling like it was photographic. 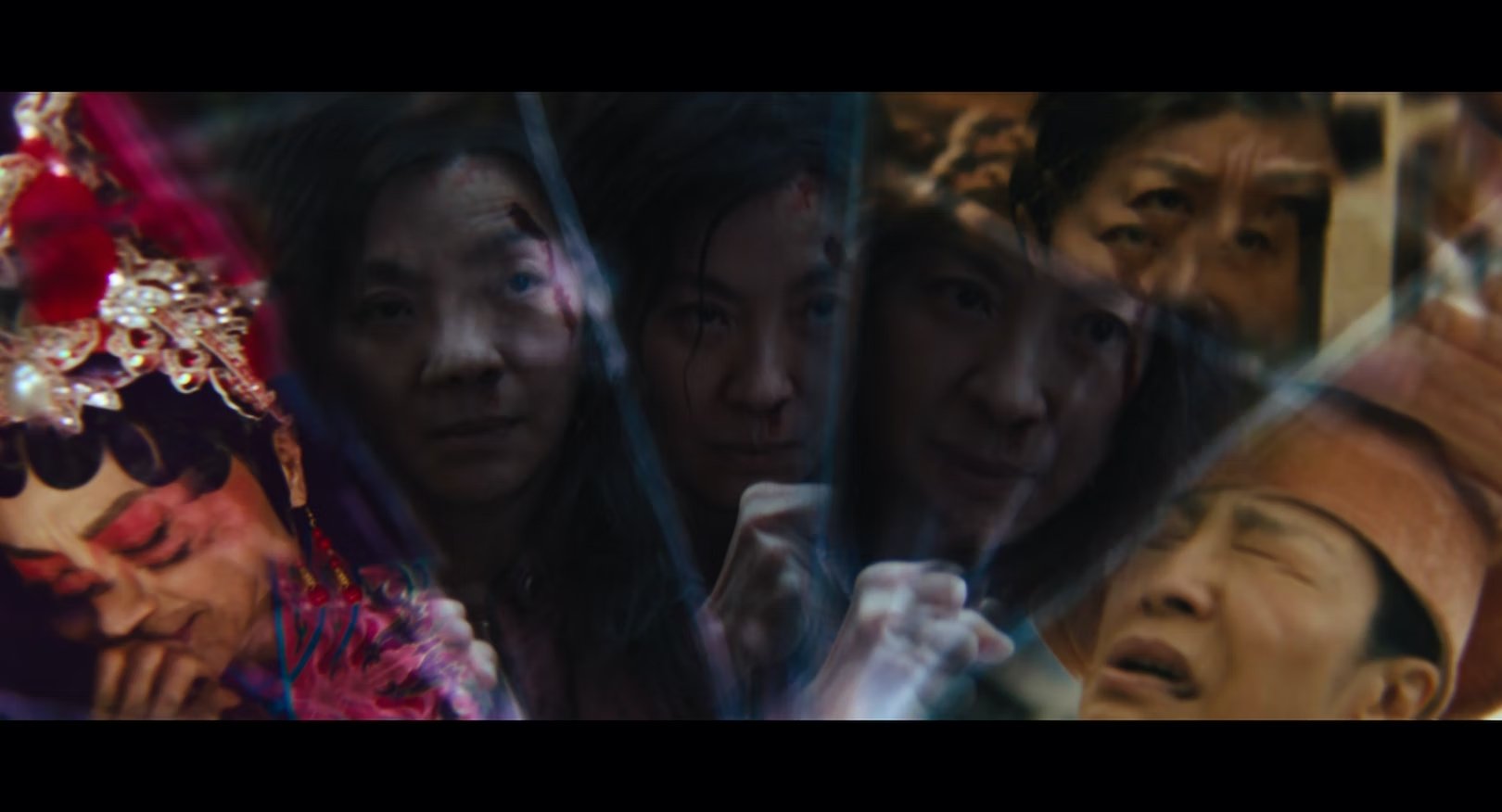 For me, the biggest achievement was taking all the varied elements —practical effects shot on set, greenscreen elements, 2D matte paintings 3D elements and more — and treating them in post to look as if they were all "lensed" together in front of Larkin's camera, lit and shaded to match his lighting. And it was all moving in a manner that felt physically plausible.

What were some of the most challenging effects to pull off?

Desom: The bagel scenes were challenging. We would shoot practical elements and test them against CGI to see which way was better. We photographed real bagels on strings painted black. Ben used Blender to develop a CG version of the bagel and we went with that one and it was sort of a big surprise in the movie because it really looked as real as if we had photographed it. 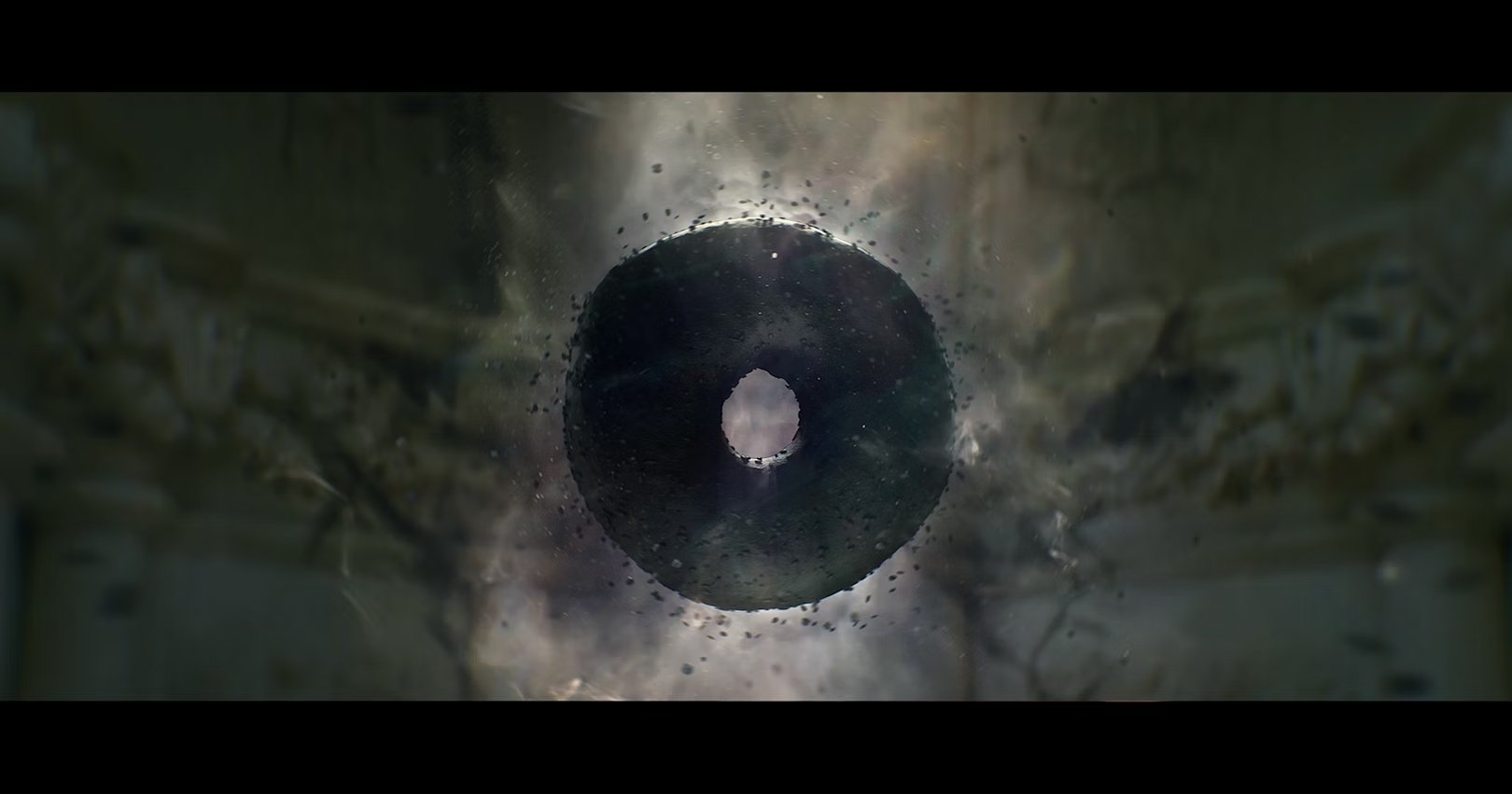 We used Trapcode Shine to add volumetric rays of light in the temple of the bagel and Particular in some scenes to make them more dynamic. I also had a template to enhance the gravitational pull of the bagel in some shots.

There’s also the showdown scene with the bagel were there’s a lot of paper flying around, practical paper that sometimes needed to whoosh by very close to the bagel. We wanted a warping effect at the event horizon where it stretches into infinity, so I used C4D to experiment, set up and render certain sheets. The lighting was even so anyone could use a sheet for a shot if they needed some paper to guide people’s eyes to what was important. 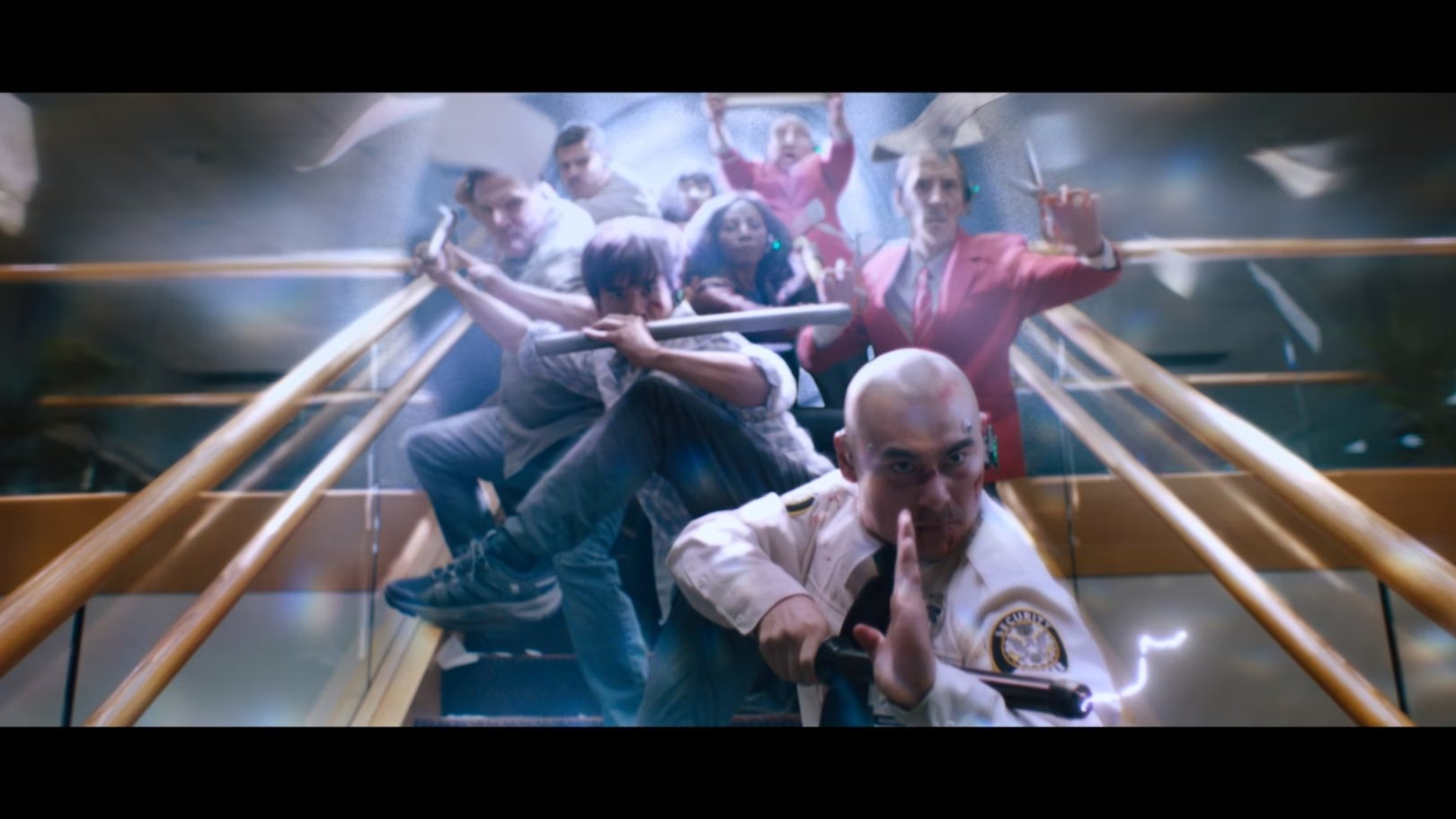 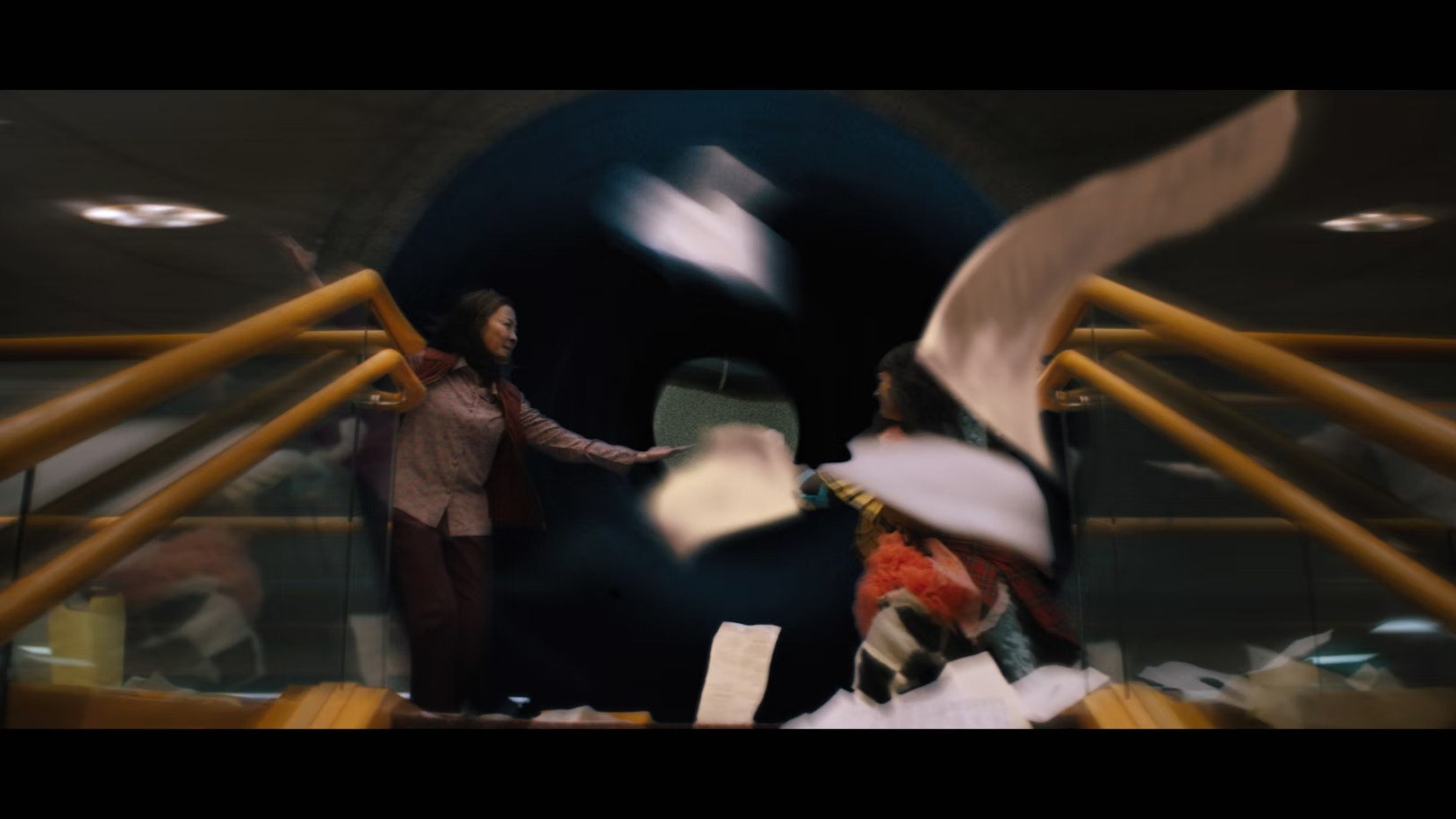 Feldbau: There was also the “Raccacoonie” scene Jeff did with the vegetables and the juggling hibachi chef. We could have gone full CG and 3D modeling, and that’s what Zak was thinking. But I proposed doing it in 2D so Jeff used the paint brush inside After Effects to draw the vegetables and animate them.

It turned out looking really good and that’s a valuable lesson that full 3D might sound like the best solution, but it isn’t the only solution. You can balance the needs of time and budget with really effective 2D tricks.

Did you develop any new techniques to accomplish certain effects?

Feldbau: In reality, we used every old trick in the book, but we did it remotely, which I’ve never seen done before. We made a 4k movie from home because of the pandemic, so I would say our pipeline was very of its time. Zak was excellent at putting together an affordable workstation package.

He also came up with a way for us to use a Dropbox alternative so we could upload our data every night and share it to everybody’s hard drives automatically. It wasn’t the most exciting or romantic technique, but I cannot believe we were able to do what we did without being under one roof to see each other, hang out and ask questions. 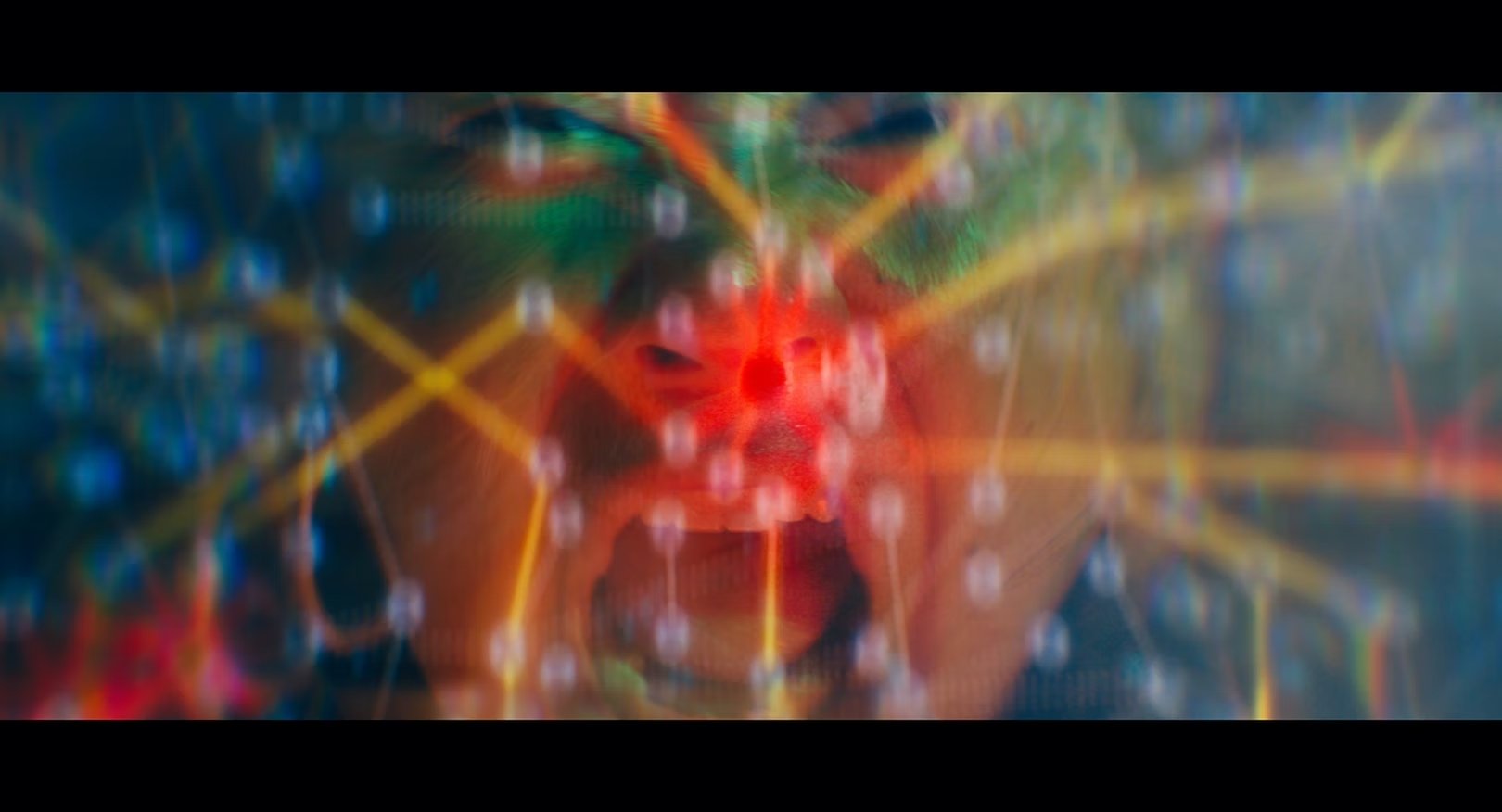 Desom: It really helped that every one of us is kind of a jack of all trades, so we know what has to be done in a given shot. That takes so much back and forth out of the equation to make something like this possible. All of us could really be our own mini post house.

Now that people know about Pretend VFX, are you getting calls for new projects?

Feldbau: We’re starting to, kind of a blend of features, commercials and TV shows. Nothing will ever be this movie again, but we’re hunting for another project with great design flair or visual trickery. We would really like to bring our services to other projects, so we’re on the lookout.